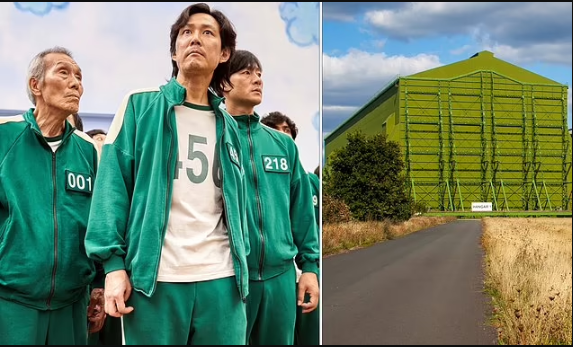 Furious contestants who have taken part in a new reality show based on Squid Game are considering legal action against Netflix.  The contestants alleged that they were ‘treated like animals’ and made to stand for hours in freezing temperatures as filming commenced at the Cardington TV Studios in Bedford on Monday.  Meanwhile, two participants were reportedly kicked off the show before filming even began after breaking production rules by having sex in the hotel they were put in.  The streaming platform has been secretly shooting a reality version based on the deadly fictional competition, with participants battling it out for the biggest cash prize in TV history – £3.7million.  As temperatures at the UK studios plummeted to -3C, some disgruntled players have hit out over having to film in such cold conditions and are even considering suing Netflix.  ‘We were tortured for eight hours. We were just fodder. You wouldn’t treat animals like that. I know the show was supposed to be tough but it felt inhumane,’ one player told The Sun.  ‘At one point I could see they were bringing on a black coffin with a pink ribbon just like in the original show. I feel like they prioritised getting a good shot over helping us.’  Another player claimed people were ‘dropping like flies’ due to the cold weather. Two players were also said to have ruined their chances before the games even began, after having sex at the Tower Hotel in London where contestants stayed in for two days before filming in Bedford commenced.  A source told the publication: ‘There were strict rules for players to follow before filming started on the show. The production team discovered two had been sleeping together and had to cut them before it even started.’  The insider went on to say the rules included not being allowed to interact with other players or smoke and drink alcohol during the hotel stay.   It comes after reports emerged contestants were reportedly left screaming ‘medic’ before they were stretchered off in freezing conditions while filming.  In a statement to Deadline, Netflix and the show’s producers Studio Lambert and The Garden said earlier this week, ‘while it was very cold on set and participants were prepared for that any claims of serious injury are untrue.’ ‘We care deeply about the health and safety of our cast and crew, and invested in all the appropriate safety procedures,’ it added.’  One player previously told The Sun: ‘Even if hypothermia kicked in then people were willing to stay for as long as possible because a lot of money was on the line.  ‘Too many were determined not to move so they stood there for far too long. ‘There were people arriving thinking they were going to be millionaires but they left in tears.’ They added: ‘It was like a warzone. People were getting carried out by medics but we couldn’t say anything. If you talk then you’re out. Some people couldn’t move their feet because it was so cold. ‘You could hear someone yell ‘medic’ and the crew would rush on. We ended up standing there for 30 minutes between takes. Some were crawling by the end. At least one was carried out on a stretcher.’The post Real-life Squid Game contestants consider suing Netflix after two players are ‘kicked outforhavingsex’ before filming even began appeared first on Linda Ikeji Blog.
Uncategorized