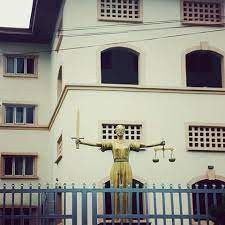 The Lagos State Police Command has arraigned three women for allegedly engaging in a public fight that resulted in one of them sustaining an injury in the Oshodi area of the state. The three women identified as Amimat Adebayo, 25; Ahmed Shukurah, 24; and Ahmed Jumoke, 28; were arraigned before Magistrate L.A. Owolabi of the Ikeja Magistrates’ Court sitting in the Ogba area of the state on Wednesday, January 25. The charge read “That you, Amimat Adebayo, Ahmed Shukurah, and Ahmed Jumoke, on January 22, 2023, around 12.30pm on Ishola Imam Street, Mafoluku, Oshodi, Lagos, in the Ikeja Magisterial District, did engage in a serious public fight, thereby committing an offence contrary to and punishable under Section 54 of the Criminal Laws of Lagos State of Nigeria, 2015.” When it was read to them, the women pleaded not guilty. Their lawyer, Christiana Folaranmi, applied for bail in the most liberal terms. Owolabi granted them bail in the sum of N50,000 each with two sureties in like sum and then adjourned the case till February 23, 2023, for mention. The post Lagos police arraigns three women in court for fighting in public appeared first on Linda Ikeji Blog.
Uncategorized