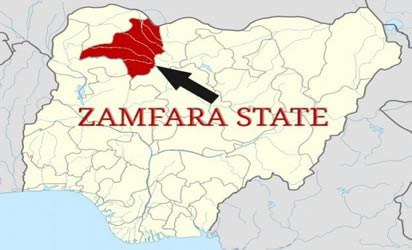 Four suspected kidnappers who allegedly attempted to kidnap a two-year-old have been arrested by Zamfara State Command of the Nigeria Security and Civil Defence Corps (NSCDC). Spokesperson of the command, Ikor Oche said the suspects were arrested on January 21 at Angwa Shado, a suburb of Gusau metropolitan, over “attempted forceful kidnap” of a child who was being carried by his 13-year-old sister on an errand in the area. One of the suspects whom the teenager described as wearing all-black clothes reportedly snatched the baby from her and ran into an uncompleted building where the other three suspects were said to have been waiting. The young girl raised the alarm, attracting community members who eventually tracked the kidnapped baby to the uncompleted building, leading to the arrest of the four suspects aged between 20 and 25. Upon being accosted, the suspects denied any knowledge of the alleged crime and further claimed they were in the building to smoke marijuana.  The NSCDC said preliminary investigations indicated that the four suspects were at the crime scene and that two of them had been identified by the sister of the allegedly abducted infant. The arrested suspects have been identified as 25-year-old Muslim Sani, 20-year-old Abdulrazak Bashir, 24-year-old Tukur Bello and 23-year-old Jafar Lawal. The suspects will be taken to court after the completion of the investigation.The post NSCDC arrests four suspected kidnappers who attempted to abduct 2-year-old in Zamfara appeared first on Linda Ikeji Blog.
Uncategorized