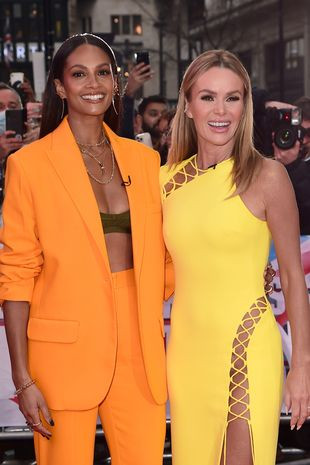 Britain’s Got Talent’s organizers are facing a major headache as Amanda Holden and Alesha Dixon are refusing to sign new contracts in a pay row over new judge, Bruno Tonioli. They are reportedly furious that new judge Bruno Tonioli will receive same wage (£850,000) they get from the talent show. With filming set to start on Tuesday, January 24, the show could be plunged into disarray with Alesha, 44, and Amanda, 51, allegedly refusing to sign a new deal. The newest series will be Amanda’s 17th on the show, while it will mark Alesha’s 11th season in the judges’ hot seat. Insiders are claiming the pair are far from happy that Bruno could be able to walk into his first series on the same wage as they are despite their longevity on the show. A source told The Sun;  “It’s a bit of a headache for BGT given filming for the next series begins at the London Palladium on Tuesday.”Bruno was still ironing out his contract on Friday too so it’s all very much down to the wire.” A source added that Amanda and Alesha held back on signing their new deal until David Walliams’ replacement was confirmed. And now, following the 67-year-old choreographer’s announcement, the duo are ready to quiz bosses about their current wage. Bruno Tonioli The source added;  “Amanda and Alesha won’t be signing their contracts until they’ve had their issues over pay addressed.”After learning that Bruno was to be getting the same pay, they decided to hold off and stand firm.“Initially there was a seven-figure pay deal on the table for Bruno but this was lowered over fears of a backlash — and now them getting the same figure has caused a rift.“Amanda and Alesha are united on this and they will not budge.“Amanda and Alesha are strong, talented and capable women who work extremely hard. And rightly they don’t think it is fair a newcomer could walk into the show and be handed the same deal as them.” Alesha had previously told Fabulous Magazine she was always going to stick with Amanda, saying the pair would never allow anyone pit them against each other.The post Britains Got Talent judges refuse to sign new contract after new judge is offered same pay as theirs appeared first on Linda Ikeji Blog.
Uncategorized