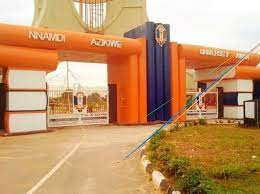 No fewer than 17 students of Nnamdi Azikiwe University Awka, Anambra State sustained varying degrees of injury while an unconfirmed number of female students were allegedly raped after some armed robbery suspects numbering about 20, raided scores of the hostels located along Ifite road, Awka, the state capital on Thursday, January 19. A student of the university, who spoke to The Nation, said the robbers, heavily armed with guns, axes and matchets, went from room to room, hostel to hostel, raping female students and dispossessing them of their phones, ipads, money and other valuables unchallenged. “We were at the hostel when we heard gunshots and fled for our dear lives as they were yet to get to our own hostel. We had to hide at the back of some shops in the area.We had loud noise of female students shouting for help but nobody could summon the courage to stop them because they were well armed. Those that attempted to resist were beaten blue and black.The number of hostels in the area, including upstairs, is about 300, but from what we got after the incident more than 17 students were injured, while those rapped may be nine or ten.” According to the student, one of the victims who claimed to be a virgin threatened to take her life after she was raped, could not further the plan following their intervention. “One of the female students was raped twice and we are holding her because she wants to commit suicide,” he added. In a bid to stop the rampant cases of armed robbery in the various student hostels, the state police command on Friday, January 20, met with the university management, Student Union Government, and Commissioner of Homeland Security Affairs. A statement released by the spokesperson of the command, DSP Tochukwu Ikenga, said the state Commissioner of Police, Echeng Echeng, who was represented by Deputy Commissioner of Police in charge of Operations, John Obuagbaka, at the meeting, stressed the need for cooperation and actionable intelligence. He said the command had since embarked on intensive patrol, improved operational positioning, and deployment of covert operatives as a solution to the security situation in the area.  He listed some of the fallout from the meeting to include another elaborate meeting with private hostel owners, president of hostels and other stakeholders on the need to provide securities to the hotels. “Among other concerns, the command also wishes to reiterate the control room number 07039194332. Furthermore, to request security services, you can call the Area Commander, Awka 07067950441, DPO B Division 08064521837, DPO Central Police Station, Awka, 07031583583, and the Command Public Relations Officer 08039334002 for prompt response,” Ikenga saidThe post Robbers injure scores, rape ladies in UNIZIK hostels appeared first on Linda Ikeji Blog.
Uncategorized