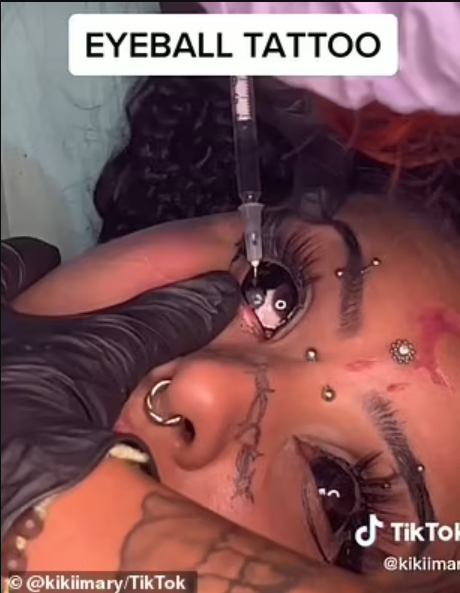 A Brazilian woman has gone viral after sharing video footage of herself having her eyeballs tattooed black, prompting outrage with several viewers warning she could ‘go blind’. Kiki Mary, from Brazil, shocked users when she posted a video of her getting the whites of eyes tattooed with black ink. 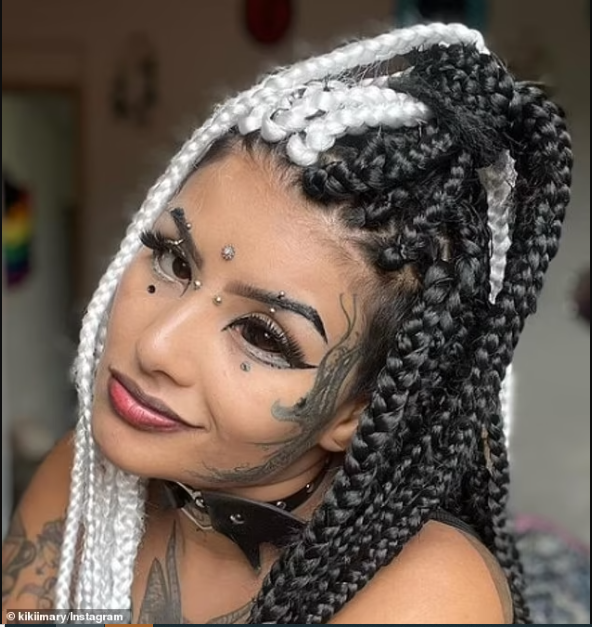 The first video showed a tattoo artist injecting black ink into one of her eyeballs with a syringe before pouring water into her eye. After she dropped some water into Kiki’s eye, the tattoo artist then patted her eye dry with gauze.  Kiki then opens her eyes to show off her new look that sees her right eye being filled with black ink.  The Brazilian woman also shared a close-up video of the same procedure. This time, the artist gives in-depth look at her work as she opens Kiki’s eye and rotates her head so viewers can see the black ink from all angles.  @kikiimary EYEBALL TATTO PART 2 #eyeballtattoo #tatuagem ##saopaulo##sp##sampa##kikimary##kikiimary##kikiiimary##aguavivahair##eyeballcamomila##tattoo##tatoogirl Creepy Clusters – Apollo Nove Several viewers were left stunned by the footage with many warning Kiki risk going ‘blind.’  One user said: ‘Why? Just why?’  Another questioned: ‘Why ruin your natural beautiful eyes?’ ‘Why risk going blind,’ said another user ‘This is something I’ll fully never ever understand,’ added another user. In the past, some women have gone blind because of same procedure.  And the social media users were right to be concerned especially because other women know the risks far too well.  Anaya Peterson, from Ireland, tattooed her eyes bright blue, taking inspiration from Australian model Amber Luke, who was said to have gone blind for three weeks after the procedure and even cried blue tears. 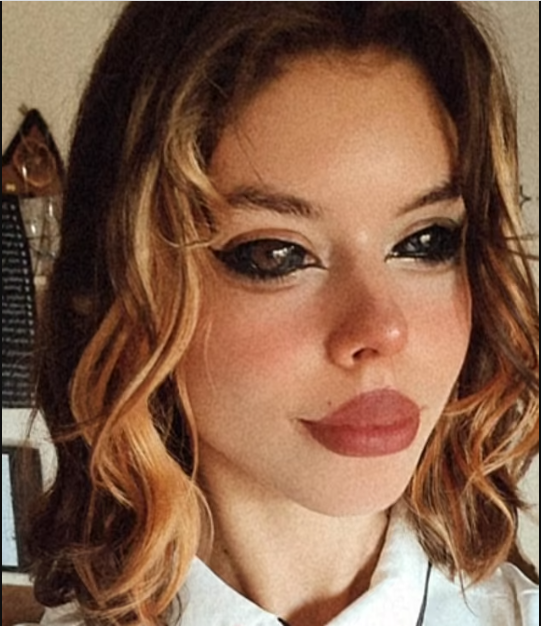 ‘I don’t have 20/20 vision anymore. From a distance, I can’t see features on faces.  ‘If I didn’t have my eyeballs tattooed, I wouldn’t be having this problem. Even today I woke up with more floaters in my eyes. And that is dangerous,’ Anaya told Kennedy News. Anaya noted that after she was inked she had to be rushed to the hospital due to the severe swelling.  ‘I’m kind of recovered — on the outside, it’s recovered. It’s just inside. I’m basically on the verge of going blind,’ she said., Aleksandra Sadowska, from Poland, also went blind after having the whites of eyes tattooed black – the exact same procedure as Kiki.  Aleksandra ultimately sued her tattoo artist, who was found guilty of permanent disability. The post Woman shares horrifying videos of herself having her eyeballs tattooed black appeared first on Linda Ikeji Blog.
Uncategorized