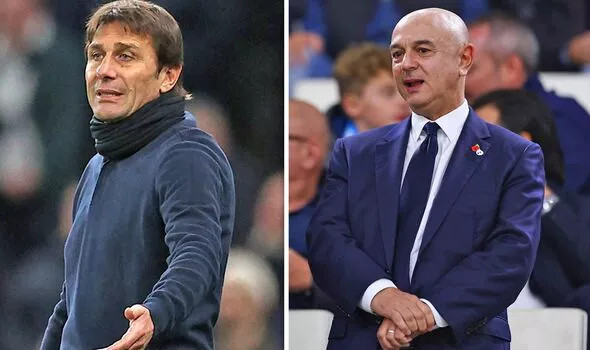 Tottenham manager, Antonio Conte has risked the wrath of the Tottenham board after suggesting that it is a “bad habit” in the Premier League for managers to be put in front of the press. The outspoken and brash Italian dropped a huge hint that he believes it is unfair that his superiors do not face criticism for their work behind the scenes and demanded better communication with club chiefs. The former Chelsea and Inter Milan coach is under mounting pressure at the Tottenham Hotspur Stadium after successive home defeats to Arsenal and Aston Villa by a 2-0 scoreline leaving Spurs in fifth place and five points behind Manchester United and Newcastle in the race for the top four.Fans are becoming increasingly frustrated with the lack of progress being made under Conte despite spending over £110m this summer, with the team’s style of football dubbed ‘boring’ by pundits. Conte has cut an irritated figure in front of the press recently, complaining about the constant distractions regarding his future and the club’s apparent unwillingness to back him in the transfer market.And his latest comments appear to suggest the 55-year-old is edging closer to the exit after taking an indirect swipe at Spurs’ senior management.Speaking about the bad habits in the Premier League which see only managers speak in front of the cameras, he said: “I have never seen the club [chairman Daniel Levy] or sporting director [Fabio Paratici] come here to explain the strategy and vision of club. In Italy, in every game there is a person from the club who has to go before the media.”I think for us it could be really really better, otherwise there is only one face to explain the situation that I think is better for the club to explain. It’s habit and I respect this habit. In Italy it’s different.”Otherwise it means that only if the coach talks there can be misunderstanding. I think it could be good for the club to be present in the media. Not every week, but at least every 15 days or once a month. I think it could be more simple for you to understand and not always the same. Otherwise it can seem if something is a criticism or negative and it’s not the case.” It comes as reports surface that Conte could be axed after just 15 months in charge, with ex-Chelsea coach and Champions League winner Thomas Tuchel one of the names believed to be in the frame if Conte were to leave. His contract is due to expire in June after signing an initial 18-month deal when he succeeded Nuno Espirito Santo in November 2021. Watch video below  “I have never seen the medical department explain why this player is having difficulty to recover. I have never seen the sporting director explain the vision of the club”Antonio Conte vents his frustration that only the head coach in England has to explain everything pic.twitter.com/tKS9SMRO8A— Football Daily (@footballdaily) January 17, 2023The post Tottenham boss Antonio Conte throws club owner Daniel Levy and board of directors under the bus demanding they face the press and explain vision of the club (video) appeared first on Linda Ikeji Blog.
Uncategorized