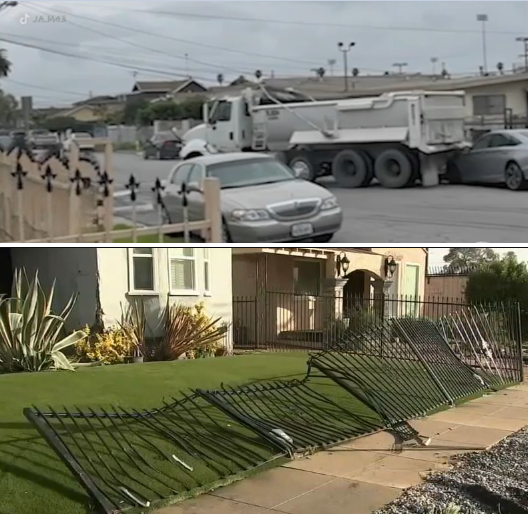 A man going through a contentious divorce was caught on camera crashing a dump truck into his estranged wife’s home and slamming into parked cars on the street. Patricia Dunn said the man in the video is her husband. They are going through a divorce, and she says she fears for her life. “A man under that kind of rage – who’s to say what he might do?” she said. “He was trying to kill me. He really was.” She said the area of the house he struck with his car was her bedroom. The incident happened Sunday afternoon, Jan. 15, in the area of 107th Street and Normandie Avenue, in South LA’s Westmont neighborhood. Patricia says her husband drove by the home three times. At first, he came by in a Chevy Impala and crashed into the home while she was inside. He returned in a dump truck and did more damage, then came back in the Impala again. The crash left the home’s metal fence bent to the ground and there are large dents in the exterior of the home right outside her bedroom.

She said: “I was just trying to stay out of the way. So I don’t know if he was drunk or under the influence. I never experienced anything like this in my life.” Neighbour Journey Meggerson caught the rampage on camera and her family tried to comfort Patricia. “That was honestly the craziest thing I have ever seen,” Meggerson said. “I can’t even believe.” The Los Angeles County Sheriff’s Department says it took about 30 minutes before law enforcement arrived on scene because the initial call came in as a traffic collision and not a crime. Patricia says she is filing for a restraining order against her estranged husband. “Because we are going through a divorce. And he is upset about the fact no contact. He’s verbally abusive and I have nothing nice to say.” She says she fears for her life and is staying with someone else in case her husband returns. Watch the video below.  1/2 Violent video shows when a man in South LA crashes a dump truck into his wife’s home. Patricia Dunn said the driver was her husband and they are going through a divorce. The story today at 4 p.m. @ABC7 pic.twitter.com/4XRaP1T6L0— Eric Resendiz (@abc7eric) January 16, 2023The post Man going through divorce crashes dump truck into wife’s home and parked cars (video) appeared first on Linda Ikeji Blog.
Uncategorized