US President, Joe Biden would easily beat former President Donald Trump in a hypothetical 2024 election matchup — but would lose if he faced off against Florida Gov. Ron DeSantis, according to a recent poll.  In a rematch of the 2020 presidential contest, the 80-year-old Biden would prevail over his 76-year-old predecessor by eight percentage points in the popular vote — 49% to 41% — but would fail against Florida’s Republican governor, Ron De Sanctis by 45% to 42% in a head-to-head contest, the WPA Intelligence survey has said. Trump announced on November 15 that he would mount a third consecutive run for the White House, while Biden is expected to seek re-election, but has yet to make a formal announcement.  DeSantis, fresh off a landslide re-election victory on Nov. 8, has not said whether he will enter the 2024 race but most political observers expect him to announce a run later this year. 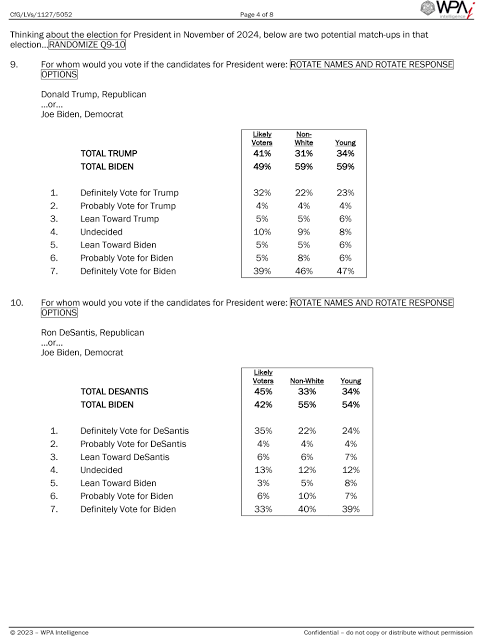 The poll, taken between January 2 and January 8 and commissioned by the conservative Club for Growth, found that while DeSantis lagged behind Biden and Trump in name recognition, his favorability rating (41%) surpassed the former president’s (39%) and came within four percentage points of the current president (45%).  But DeSantis’ unfavorable rating (38%) comes in well below Biden (55%) and Trump (60%). “More Americans are learning about Ron DeSantis and the good he’s done as the Governor of Florida,” said Club for Growth PAC President David McIntosh. “Of the potential candidates surveyed, DeSantis has high favorability with room to grow.” The survey was concluded before the announcement that classified documents from Biden’s time as vice president had been found at his Wilmington, Delaware home, as well as a Washington DC think tank office he used after leaving the Obama administration in 2017. The poll surveyed 1,035 voters and has a margin of error of plus-or-minus three percentage points. The post Joe Biden would defeat Trump in 2024 but lose to Ron DeSantis: New poll says appeared first on Linda Ikeji Blog.
Uncategorized