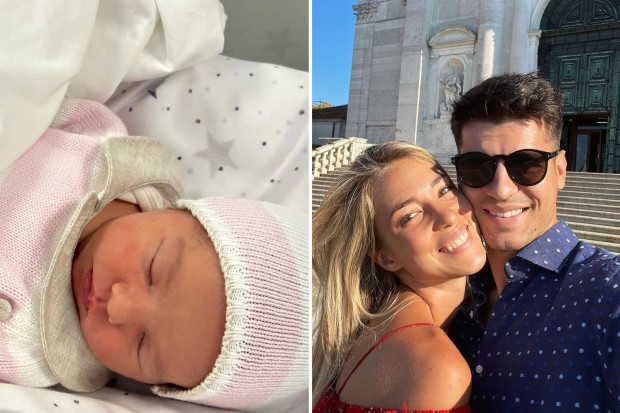 Athletico Madrid forward, Alvaro Morata has revealed that his wife is in intensive care in a hospital after giving birth to their fourth child. His Italian wife,  Alice Campello is receiving specialist care at the University Hospital of Navarra in Madrid after suffering ‘complications.’ The former Chelsea striker, disclosed the health issue as he announced the birth of the couple’s first daughter Bella and posted adorable photos of her sleeping in pink and white pyjamas. The 30-year-old Spanish international said: ‘Bella was born on the 9th and she is wonderful. ‘Unfortunately, after the delivery went very well, the mother has started to have complications that have scared us a lot. ‘Right now she is in the intensive care unit of the University Hospital of Navarra in Madrid where she is being cared for by the best doctors and little by little she is recovering very well… she is very strong.’ 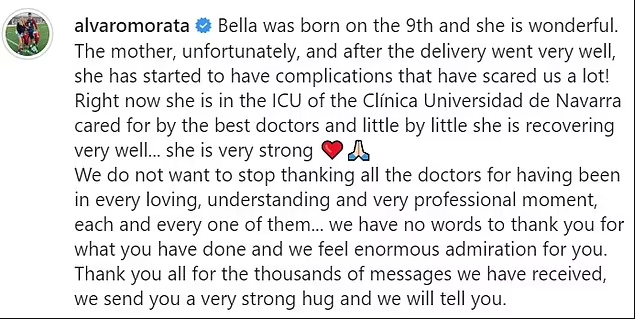 The couple have twins, four-year-old Alessandro and Leandro, and a younger boy called Edoardo who is two.The post Former Chelsea striker, Alvaro Morata reveals his wife is in intensive care after suffering complications during the birth of theirfourthchild appeared first on Linda Ikeji Blog.
Uncategorized