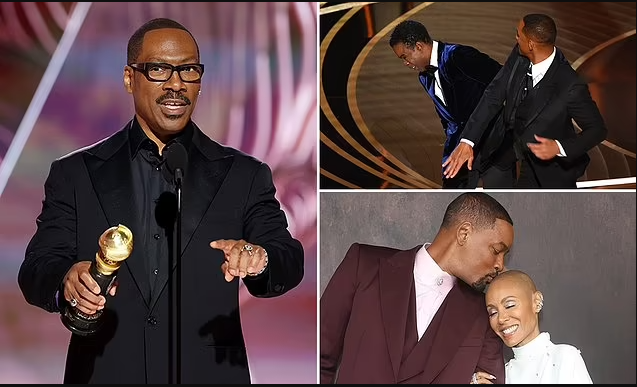 Eddie Murphy threw shade at Will Smith over his infamous Oscars slap during, a 2023 Golden Globes speech. The Legendary movie star, 61, won the coveted Cecil B DeMille award at the 80th annual ceremony on Tuesday January 11, once again reminding the world of his playful humor. The star shared his three ‘simple’ tips to enjoy a long-lasting career: ‘Pay your taxes, mind your business and keep Will Smith’s wife’s name out of your f*****g mouth’. Eddie Murphy’s reference to the slap Smith, 54, landed comedian Chris Rock across the face at the 2022 Oscars filled the star-filled room with laughter. Viewers flocked to Twitter to share their delight at the cheeky joke. One tweeted: ‘Eddie Murphy just dropped the mic on Will Smith at the Golden Globe Awards tonight. Love it!’ Another wrote: ‘Been an Eddie Murphy fan since the 80’s… only Eddie Murphy can drop a F bomb on a Will Smith joke… truly special. Amazing talent!!!’ Will Smith shocked the world last year over a joke Chris Rock made about the actor’s wife, Smith took to the stage and slapped him. The actor was unimpressed by the mockery as his wife Jada, 51, famously shaved her hair off to hide hair loss. 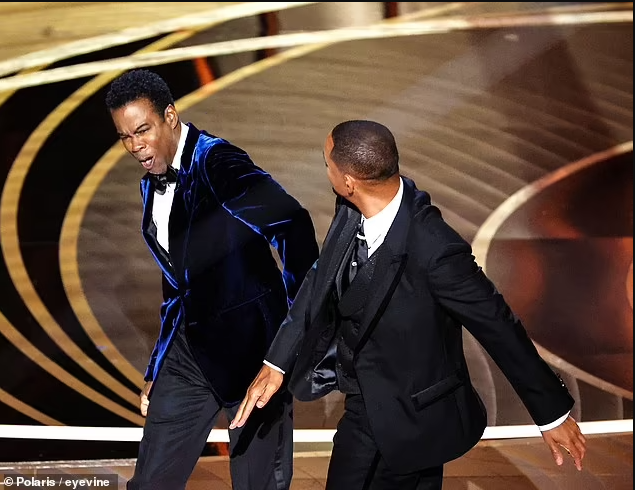 ‘You’ve been moving through your creative life, and we’ve all gotten to see you grow as an artist,’ Jamie Lee Curtis said as she introduced the legendary comedian. In his speech, Murphy stated: ‘I’ve been in show business for 46 years, and I’ve been in the movie business for 41 years, so this has been a long time in the making and greatly appreciated.’ He continued: ‘Like I said, I’ve been doing this for a long time so I could literally stand up here and keep saying thank you till they play the piano. ‘But I’m going to wrap it up and say something to all the new up-and-coming dreamers and artists that are in the room tonight. I want to let you know that there is a definitive blueprint that you can follow to achieve success, prosperity, longevity, and peace of mind. ‘It’s a blueprint and I followed it my whole life, it’s very simple. There’s three things you just do: pay your taxes, mind your business and keep Will Smith’s wife’s name out of your f*****g mouth.’The post Eddie Murphy mocks Will Smith’s infamous Oscar slap as he accepts award atthe Golden Globes appeared first on Linda Ikeji Blog.
Uncategorized