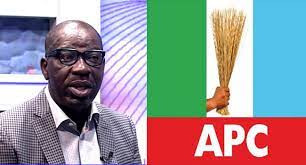 The Edo state chapter of the All Progressives Congress (APC) has berated the state governor, Godwin Obaseki, over the recent train attack recorded in the state. In a statement released by its publicity secretary, Peter Igbinigie, the party stated that the Governor receives huge sums of money as security vote from the Federal government and wonders what he does with it. Part of the statement reads; ”It is saddening to experience this especially when we are still basking in the euphoria of the new year. However, this smack of the lack in the security apparatus in Edo State as been expected of the Chief Security Officer: Governor Godwin Obaseki.We have severally demanded that the Governor should explain to Edo people, what he does with the humongous security vote he receives from the Federal Government monthly.We are also not unaware that the Governor receives not less than N800m monthly to tackle insecurity in Edo State monthly.”The post What does he do with the humongous security vote he receives from the Federal Government monthly?- APC tackles Edo state governor over recent train attack appeared first on Linda Ikeji Blog.
Uncategorized