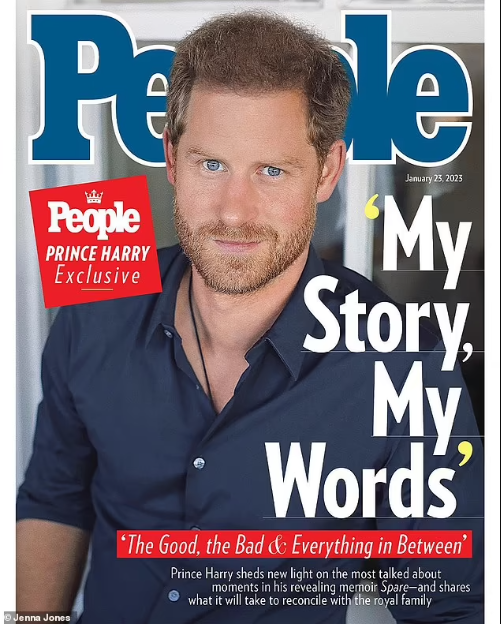 Prince Harry has justified why he revealed he killed 25 Taliban because soldiers should discuss ‘parts of our service that haunt us’ in a new US magazine piece. The Duke of Sussex claimed in his memoirs to have killed 25 enemy fighters during two tours of Afghanistan, calling his victims ‘chess pieces’ rather than people as a means of bearing the emotional strain of taking dozens of lives. Harry told People that he spoke openly about his time in Afghanistan – and killing insurgents – ‘for my own healing journey’ and ‘in the hopes it will help others’. It came as Harry was accused of reducing the royals to a laughing stock ahead of an appearance on the satirical ‘The Late Show’ with Stephen Colbert, due for broadcast in the US tonight. Senior figures in the British Army, have said his admission is a breach of the unwritten code that soldiers do not count ‘notches on their rifles’. Others said Harry had betrayed ex-comrades by risking their safety, his own and that of the Royal Family.Justifying his decision to tell millions that he opened fire and killed 25 fighters as an Apache helicopter gunner, Harry told People, a favoured US magazine of the Sussexes’: ‘I know from my own healing journey that silence has been the least effective remedy. Expressing and detailing my experience is how I chose to deal with it, in the hopes it would help others’. Former military commanders, pilots, aid workers, and diplomats condemned the remarks, which they claimed handed the militants a propaganda victory. He also faced the ignominy of being branded a ‘big-mouth loser’ by the Taliban themselves. But Harry told People: ‘This is something each soldier has to confront, and in the nearly two decades of working alongside service personnel and veterans, I’ve listened to their stories and have shared mine.  ‘In these conversations, we often talk about the parts of our service that haunt us — the lives lost, the lives taken. But also the parts of our service that heal us and the lives we’ve saved.”It’s a duty, a job, and a service to our country and having done two tours of duty in Afghanistan for my country, I’ve done all I could to be the best soldier I was trained to be’. He added: ‘There’s truly no right or wrong way to try and navigate these feelings’.The post Prince Harry claims he had to reveal that he killed 25 Taliban for hisownhealing appeared first on Linda Ikeji Blog.
Uncategorized