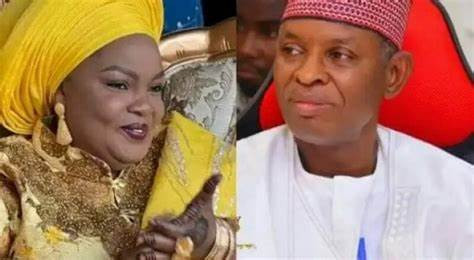 A dramatic scene played out at the VIP lounge gate of the Aminu Kano International Airport on Sunday night January 8, as the Department of State Services arrested Kano State governorship candidate of the New Nigerian Peoples Party, Abba Yusuf, on orders of the agency’s Director-General’s wife, Punch reports.  Aisha Bichi reportedly ordered the arrest of Yusuf following a confrontation between them. According to the publication, the governorship candidate’s convoy caused traffic congestion which prevented Bichi’s convoy from gaining access to the VIP lounge. In a move to clear the ensuing traffic gridlock, there was an altercation between the DSS operatives and the aides of the governorship candidate. This led to a confrontation between Yusuf and Bichi following an exchange of angry words between them. The publication reported that shortly after Bichi threatened to ensure that Yusuf did not board his flight, Yusuf was barred from boarding an Air Peace flight heading for Abuja before he was arrested. A source said;  “The DSS DG’s wife actually ordered the arrest of the Kano governorship candidate of the New Nigeria Peoples Party, Abba Yusuf, and barred him from boarding an Air Peace flight from Kano to Abuja on the fateful Sunday night.“The trouble started at the gate of the VIP lounge of the  Aminu Kano International Airport, Kano when the motorcade of the politician caused traffic which delayed  Bichi’s convoy from gaining entry into the controlled area.“The action really angered Bichi as her security guards started beating up people and hitting vehicles for blocking the VIP gate.” Another source told Daily Trust that the DSS DG’s wife allegedly ordered the assault of one of Yusuf’s aide who was filming the incident.  The source said;  “The situation escalated after she told Yusuf that they will not board the same flight as earlier scheduled, and she spotted one of his aides, Garba Kilo, filming.“They beat him (Kilo) up badly, and this is what probably made Yusuf insist that he will board the same flight with her as scheduled, which angered her more, and she ordered his arrest.” DSS spokesman, Peter Afunanya who confirmed Yusuf’s arrest, said he was arrested for a suspected breach of security and kept in custody. Afunanya said;   “He is in custody. He was validly taken in for a suspected breach of security.” The post DSS Director’s wife orders arrest of Kano governorship candidate appeared first on Linda Ikeji Blog.
Uncategorized