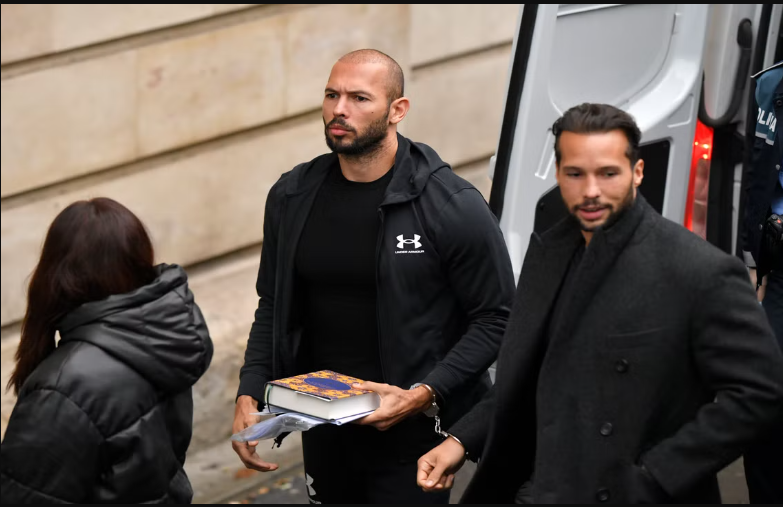 Andrew Tate has arrived at court to challenge his 30-day arrest as part of a probe into alleged human trafficking, rape, and exploitation of women. The controversial influencer, 36, was pictured stepping out of the back of a police van in Bucharest this morning handcuffed to his detained brother Tristan. 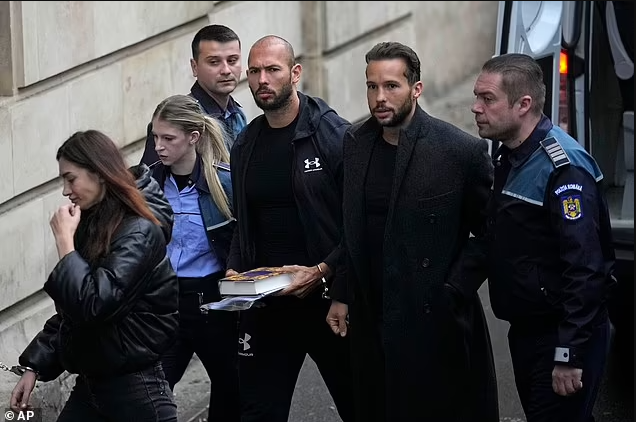 In front of the millionaire adult webcam businessmen were the so-called ‘Tate’s Angels’ in handcuffs, former policewomen Luana Radu and Georgiana Naghel, Andrew’s alleged girlfriend. The four were arrested after a raid of Tate’s concrete compound on December 29, following accusations of recruiting and trafficking young women into online pornography by seducing them and falsely claiming to want a relationship. They have denied wrongdoing through an attorney and have challenged the arrest warrant.  The alleged victims were sexually exploited by being forced to produce pornographic content for social media sites which generated large financial gains, according to prosecutors. 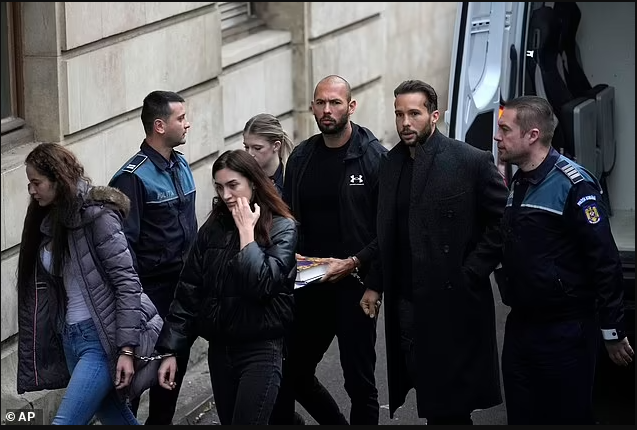 Prosecutors also said one of the brothers raped one of the victims in March of last year, which is when the investigation started. ‘The possibility that the suspects would evade investigation, leave Romania and settle in countries that do not allow extradition given their financial possibilities and public comments to that regard cannot be ignored,’ the court judge said in the written record approving the arrest. 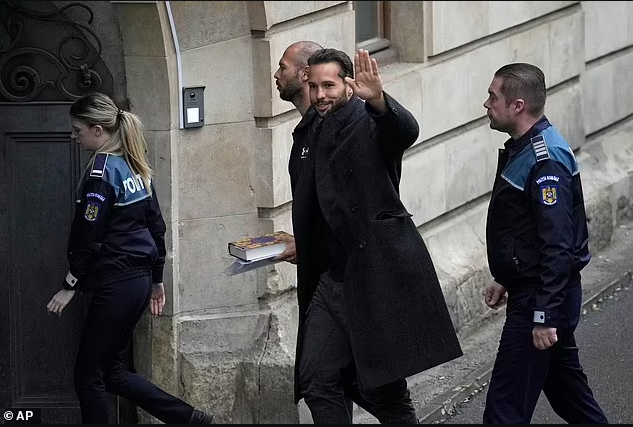 Prosecutors have seized 15 luxury vehicles and over 10 properties and homes belonging to the suspects in Bucharest and Prahova and Brasov counties, Ramona Bolla, a spokesperson for Romanian anti-organized crime unit DIICOT, told Reuters. The seizure was meant to prevent the assets being sold or concealed. Should the court uphold the arrest warrant and the investigation need more time, prosecutors can seek approval for further extensions of up to 180 days of detention under Romanian law. Tate gained mainstream notoriety for misogynistic remarks and hate speech, which got him banned from all major social media platforms, although since Elon Musk took over Twitter his account was reinstated in November. 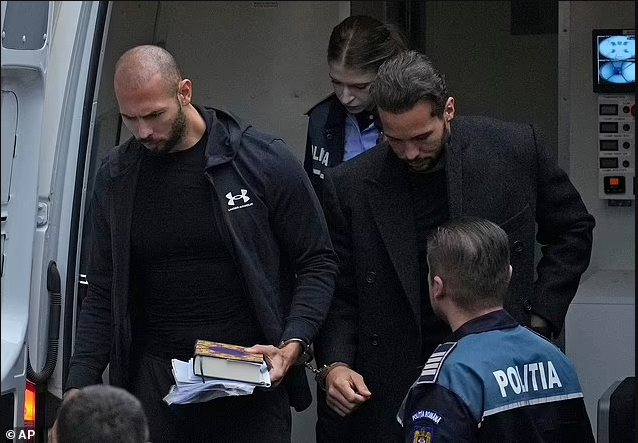 The former professional kickboxer, who holds U.S. and British nationality, has said women are partially responsible for being raped and that they belong to men. He is a self-professed misogynist. On a podcast last year, he said he started making money by convincing multiple girlfriends to video chat and share the profits back when he lived in London. ‘How can I use these women to make me money?’ Tate said, adding his business started with two girlfriends and peaked with 75 women working for him and earning $600,000 a month. He has also said he moved to Romania after being investigated in the United Kingdom on charges of sexual assault, which were ultimately dropped, because he liked living in countries where corruption was accessible to everybody. The former Big Brother star recently converted to Islam, declaring it the ‘one true religion’, and has posted excerpts from the Quran online to his large following.  One of his ‘angels,’ Radu, 32, was previously based at a police station in central Bucharest but quit the force eight years ago to pursue a career working in video chat rooms, which attract men from all over the world and have become a lucrative industry in Romania. 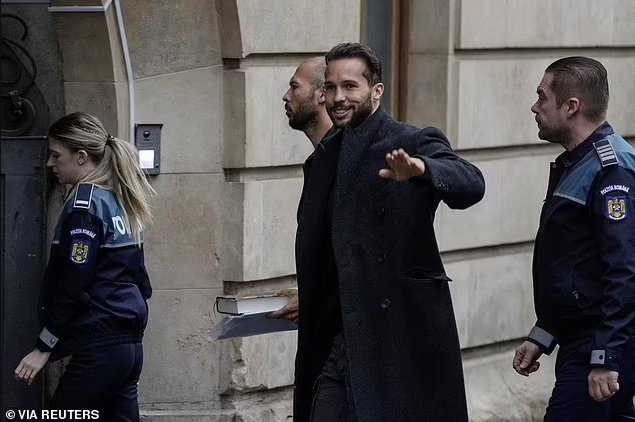 While Naghel, 28, who is a US citizen, is described as a businesswoman and influencer who is believed to have been dating Tate for almost a year. Yesterday, prosecutors alleged in court filing that Tate refused to let women leave his compound without being escorted by one of his employees, according to WhatsApp messages. The messages are allegedly from women Tate and his brother are accused of forcing to create online sexual content. In the unearthed messages between Tate and his alleged victims, the infamous misogynist appears to boast about how he runs the operation. This comes after the lawyer of the Tate brothers claimed Romanian prosecutors had no evidence to back up the allegations of rape and human trafficking. The messages show Tate allegedly threatening a women in a WhatsApp group that includes his employees and the alleged victims. Filed by prosecutors and released by Gandul, they show one of the women asking to leave the compound. Andrew Tate tells the woman ‘don’t go anywhere’ without one of three trusted employees. She then asks Tate: ‘Why are you so cold to me?’ Tate then tells her: ‘Don’t go out alone without telling me. Mall, supermarket, nowhere from now on.’The woman says that she had already told him that she ‘wanted to go alone’. Tate then says this is her ‘last warning!’ In the other messages released by Gandul, Tate brags about how he runs the operation. One woman messages him: ‘I heard you’re the one running the Onlyfans and TikTok girls business.’ Tate responds: ‘Tristan and Georgiana [Georgiana Naghel, who was also arrested with the Tate brothers], but I lead them.’ The released messages come after Tate’s lawyer claimed Romanian police have no evidence to back up their allegations of rape and human trafficking against the infamous misogynist.The post Andrew Tate and his brother Tristan are handcuffed together as they arrive atcourt over alleged human trafficking, rape, and exploitation of women (photos) appeared first on Linda Ikeji Blog.
Uncategorized