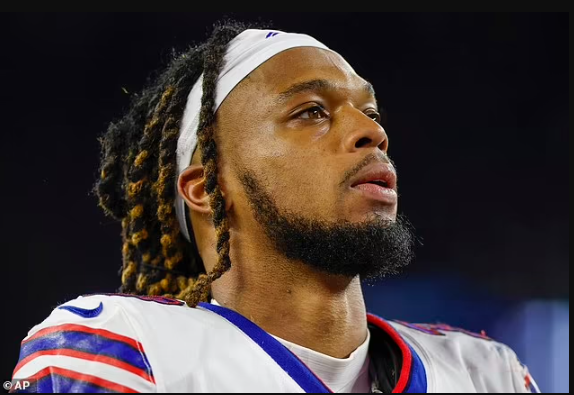 Damar Hamlin has posted on social media for the first time since his cardiac arrest, to thank fans for the support he has received in an emotional statement. The 24-year-old collapsed on Monday January 2, after making a tackle in the first quarter playing for the Bills against the Cincinnati Bengals. He had to be resuscitated on the field. On Saturday January 7, Hamlin wrote on Instagram: ‘When you put real love out into the world it comes back to you 3x’s as much. ‘If you know me you know this only gona make me stronger. On a long road keep praying for me.’ He put out a similar message on Twitter, writing: ‘Putting love into the world comes back 3xs as much… thankful for everyone who has reached out and prayed.  ‘This will make me stronger on the road to recovery, keep praying for me!’ 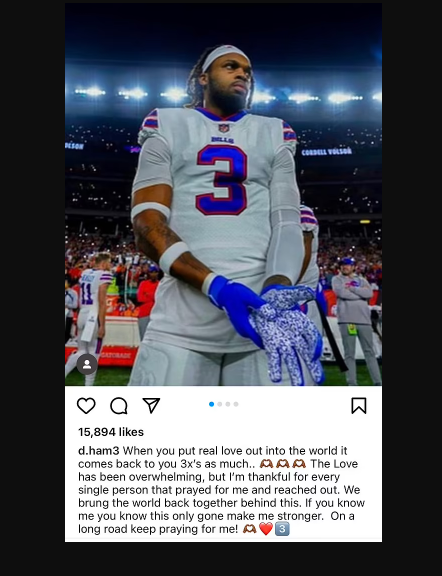 Before kickoff in Saturday’s late game, the Tennessee Titans and Jacksonville Jaguars came together as one to pray for Hamlin in the middle of the field during their warmup. Hamlin took to Twitter again, minutes after, to say: ‘The love is felt, & extremely real.  ‘No matter race or religion everybody coming together in prayer!’  It comes as the Buffalo Bills also released an update on Saturday with positive news on the 24-year-old’s health. ‘Per the physicians at UC Medical Center, Damar is making continued progress in his recovery yet remains in critical condition,’ the statement said. ‘He continues to breathe on his own and his neurological function is excellent.’ The Bills were given a big surprise on Friday when Hamlin spoke to them via FaceTime, saying ‘love you boys’ and flexing his arm muscles following the removal of his breathing tube.  Bills head coach Sean McDermott spoke to the press after the interaction with Hamlin and attempted to describe the scene to reporters, but admitted he ‘probably won’t be able to do it justice.’ ‘Amazing, touching, to see Damar,’ McDermott began. ‘No. 1, through my own eyes.  ‘I know that’s something I’ve been looking forward to, kind of needing to see I guess. And then to watch the reaction in the room with the players and the staff and the team.’ Hamlin collapsed and had to be resuscitated on the field after suffering a cardiac arrest following a tackle with Cincinnati Bengals’ Tee Higgins during the first quarter of the Monday Night Football matchup.  The post NFL star, Damar Hamlin posts on Instagram for the first time since his cardiac arrest as he thanks fans for ‘overwhelming’ love and support appeared first on Linda Ikeji Blog.
Uncategorized