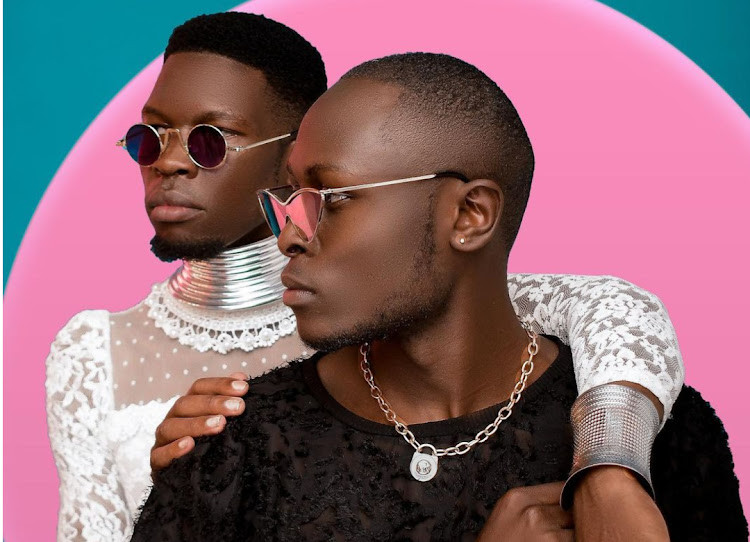 Late Edwin Chiloba and his partner Jackton Odhiambo.Police in Kenya have arrested and identified Jackton Odhiambo as the main suspect in the murder of LGBTQ activist, Edwin Chiloba.  Odhiambo, who was in a relationship with the LGBTQ activist confessed to k*lling him and depositing his body by the roadside over allegations that he cheated on him. Three more suspects were also arrested in a probe into the brutal murder of  Edwin Kiprotich Kiptoo alias Chiloba. This brings to four, the number of those in custody, police said. The three were arrested for assisting in carrying a metal box that was used in disposing of the body of Chiloba. The three are young men, two of whom are under 18 years, police said. Police spokeswoman Resla Onyango said detectives have also detained a car that was used in disposing of the body on the road. She added that love triangle is among the theories they are pursuing for now. The prime suspect in the murder of fashionista Jackton Odhiambo, 24, confessed to killing the model over allegations that he cheated on him. According to Police, Jackton executed the murder with the help of his two friends. The suspect said he murdered Chiloba as revenge for betraying him. Jackton who had been staying with the deceased for one year in Eldoret was arrested on Friday January 6, as the main suspect in the murder. The two lived together as husband and wife. Chiloba’s caretaker Alex Nyamweya said that Jackton called him using Chiloba’s phone on January 4, informing him that he was vacating the house they lived in. Police said Jackton vacated the house with immediate effect. Police disclosed that Jackton told curious neighbours who had perceived a bad smell from a house Chiloba stayed with him and two others that it was a dead rat that had died there and that he was trying to remove it. “He told the neighbours it was a dead rat that was smelling when they sought to know what was smelling from the house they lived,” Uasin Gishu county DCI boss Peter Kimulwo said. The body was dumped in Halingham near Kipkaren. The neighbours had seen Jackton with the metal box a day earlier. Kimulwo said preliminary findings show the deceased appeared to have been strangled and one eye was gouged out. Kimulwo said a chief informed police that a metal box was dropped by the roadside in Kipkaren area on January 3, 2023. Residents found a dead body of an adult wrapped in a woman’s dress in the metal box. Kimulwo said on new year eve Chiloba and friends went to Tamasha club and came back at around 3am to where they lived. When they arrived neighbours heard commotion and cries which subsided minutes later. On January 3, neighbours saw a vehicle with two people loading a metal box into the vehicle and left. “We suspect the noise heard earlier by the neighbours was the time the deceased was killed,” Kimulwo said. He said the suspect and the deceased lived together as partners. He had arrived from Nairobi for the new year celebrations. The family positively identified his body at the Moi Referral Hospital morgue in Eldoret. His sister Melvin narrated her final moments with Chiloba with whom they met for new year celebrations at Tamasha place in Eldoret. Melvin works at Tamasha and says Chiloba arrived at about 10pm with a friend whom she did not know. “At about 1 am after the new year fireworks, I met him and he bid me farewell saying he would miss me,” she told journalists.      View this post on Instagram           A post shared by Lindaikejiblog (@lindaikejiblogofficial)The post Kenyan gayright activist, Edwin Chiloba’s partner confesses to killing and disposing his body over allegations that he cheated on him (video) appeared first on Linda Ikeji Blog.
Uncategorized