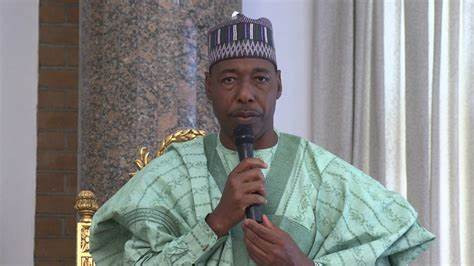 Governor Babagana Zulum has said that Borno state is 90% safe for elections to take place.  Fielding questions from reporters at the presidential villa in Abuja on Friday, January 6, Zulum said the security situation in Borno has greatly improved. He further disclosed that his administration is working to rehabilitate and resettle residents that were displaced by insurgents. Zulum said;  “The people of Borno state voted during the 2015 election. They also voted during the 2019 election.“Can you compare the security situation in 2019 and 2015 and now? The security situation has improved tremendously by over 90 percent so we don’t have any problem. Eligible voters can go and cast their votes on election day, Inshallah, in Borno State, we don’t have any problem.“We are thankful that there is great improvement in terms of security in Borno state. We are doing very well now, rehabilitation and resettlement is also going very well.“We are looking forward to seeing how we can rehabilitate Maiduguri, Gamborun-Gala road and then Maiduguri-Banke road with a view to opening up opportunities for the people to earn their means of livelihood.” Zulum also revealed that there is no longer an official camp for internally displaced persons (IDPs) in Maiduguri, capital city of Borno. He added;  “We have closed down all official IDPs camps winin Maiduguri Metropolitan Council and Gere LGA as I said, last one year ago.“For now, we don’t have any official IDP camps within Maiduguri Metropolitan Council, the unofficial camps will also be closed in the next few months.”  The post 2023 Election: Security in Borno has improved tremendously by over 90 percent – Zulum appeared first on Linda Ikeji Blog.
Uncategorized