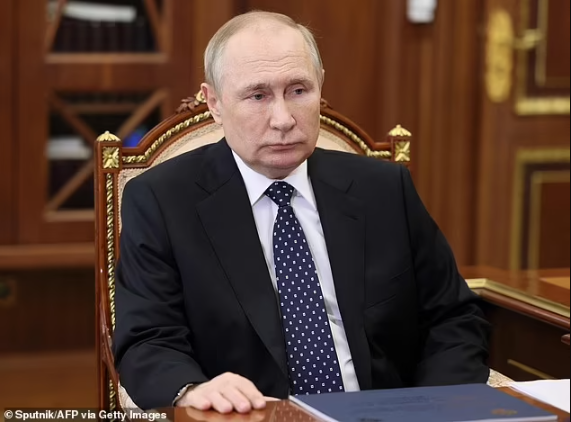 Russian president, Vladimir Putin has revealed that he’s open for peace talks with Ukraine to end the war, but only if Kyiv accepts ‘new territorial realities’. The Kremlin claims it has annexed the Donetsk, Lugansk, Zaporizhzhia, and Kherson regions despite not controlling them in their entirety. The Kremlin said on Thursday January 5, that Putin told Erdogan peace talks are possible, but only if Ukraine accepts that territories occupied by Moscow as Russian. ‘Putin again confirmed Russia’s openness to serious dialogue on the condition of Kyiv authorities fulfilling the well-known and repeatedly voiced requirements of taking into account the new territorial realities,’ the Kremlin said in a statement. Erdogan had called for peace talks in the phone call with Putin, his office said earlier. ‘The Russian side emphasised the destructive role of Western states, pumping the Kyiv regime with weapons and military equipment, providing it with operational information and targets,’ the statement from the Kremlin added. This is not the first time Putin has expressed that he is ready for peace talks under the conditions set out by Moscow. On Christmas Day, in an interview with state television about the war in Ukraine, Putin said that Russia is ‘prepared to negotiate some acceptable outcomes’. The leaders also discussed the implementation of a landmark grain deal, brokered by the UN with the help of Turkey, to unblock Ukrainian grain. The Kremlin said the pair discussed ‘the unblocking of food and fertiliser supplies from Russia’ and the need for ‘the removal of all barriers to Russian exports.’  The post President Putin tells Ukraine he is ready for peacetalks appeared first on Linda Ikeji Blog.
Uncategorized