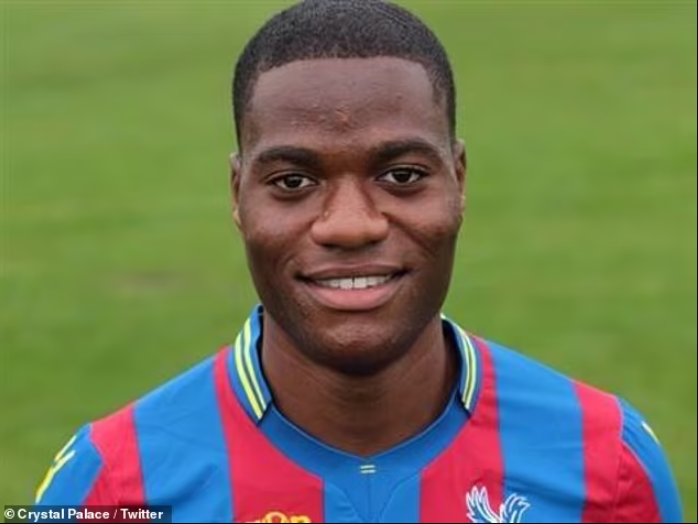 Footballer, Fisayo Adarabioyo threatened to kill his ex-girlfriend after she told him she was pregnant, a court has heard. The former Crystal Palace attacker, 27, had a casual relationship with Nadia Messaoud, 39, but he later ended it. According to Mail Online, the pair had only met up a dozen times but in May last year, she texted him to say she was six months pregnant. Adarabioyo then raced round to her home in Knutsford, Cheshire, at 10pm and banged on the door and threw pebbles at her window when she refused to let him in, Warrington magistrates court heard. The angry striker, who also played for two Dutch sides and Macclesfield Town, then texted his ex-lover: ‘If you tell anyone I’ll kill you’. He also sent a message which read: ‘I genuinely hope you die’ and then told her ‘Just kill yourself – everyone will be happier’. Single mother Nadia rang the police after he bombarded her with 45 calls. Adarabioyo, who lives in Knutsford, was convicted of harassment without violence and handed a 12-month community sentence of 100 hours unpaid work. The player, who never made an appearance for Palace after signing in 2014 but later played for non-league teams Ashton United and Altrincham Town, was also ordered to £640 costs. Deputy District Judge Owen Jones said his ‘behaviour was out of order’ as he ordered him to pay Nadia £200 compensation. The judge also imposed a 12-month restraining order banning Adarabioyo from contacting Nadia or going near her home. The court heard that the pair had been in a casual relationship since December 2021 but Adarabioyo had called it off by the time Nadia found out she was six-month pregnant. She texted the Adarabioyo, who has now finished playing and wants to become a footballer’s mentor, to say he was going to be a father which provoked a furious reaction. Prosecutor Laura Simpson said the harassment made Nadia feel ‘scared’. In a victim impact statement, the mother-of-two said: ‘When I hear a noise at night, I feel worried he has come back. ‘I just wanted to do the right thing letting him know he was going to be a father.’ Defending Richard Orme conceded that the footballer ‘became distressed and over-emotional’ and ‘is ashamed of his behaviour’ but that he was in ’emotional turmoil’. Mr. Orme added: ‘He was angry and felt he had been duped by this lady over this earth-shattering news.’ The court heard that Adarabioyo is still in the danger of what the baby was born and whether he is the father. Mr. Orme claimed he viewed Nadia as a ‘gold digger’ and claimed she played ‘fast and loose with the truth’. He said: ‘His brother is a footballer in the Premier and he feels he has embarrassed his family over this. ‘He is no longer a professional player and is not working at the moment. ‘He hopes to become a mentor to footballers in the future.’ However, the court heard that Nadia gave birth to a baby girl in August. She already has a seven-year-old son with another professional footballer.The post Former Crystal Palace footballer, Fisayo Adarabioyo threatened to kill his ex-girlfriend after she told him she was pregnant,courthears appeared first on Linda Ikeji Blog.
Uncategorized