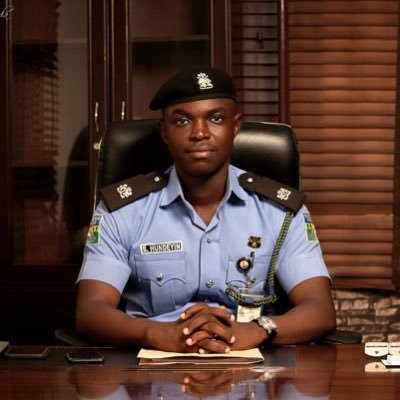 Benjamin Hundeyin, the spokepserson of Lagos police command has slammed a female Twitter user who demanded a refund after some police officers allegedly took N10k bail from a person she reported to them.  @_peesee revealed that the bail was paid at Isheri police station, even after telling the police officers there that bail is free.  She tweeted; I have had the craziest week ever. I practically cannot say anything because I am weak and stressed. I use to believe there is hope, but with things I have experienced this week, I have questioned my self severally asking if fixing this country is possible.Mentally stressed. I just got in and I am on the floor typing this and wondering if there is hope for this country. This is not a tweet about the government failed us, this is a tweet about we are the reason we are where we are. Alot of us are greedy, stingy, wicked and are just looking for opportunities to use our positions to exploit others. My experience today at the Nigerian Police state is a complete example of make sure you don’t have problems that will make you go to the police. The women on duty I meet are ridiculously wicked.I have never seen women in the manner I did today, they knew I stood up for the truth, you need to see them running round with phone hiding to record our conversation thinking I will be foolish to fall victim of the nonsense. I made a complaint and I was asked to pay 30,000These wicked cold heartless women wanted me to even lie and implicate the person I brought from them to investigate. I was left speechless, I stood my ground and insisted that I won’t pay a dime as logistics fee for my issue to be looked into. Where are we going.Women for that matter. I have never felt less like I did today. DCO with her long Jeans skirt and all back hair style was giving high bills to everyone brought before her. The woman is a definition of wickedness. A complete wild two sided wicked snitch.She asked I withdraw the case if I was interested and still went ahead to collect 10k before releasing the guy. Is this the people we should run to when in trouble who are concerned just about money. She even said the reason they ask for money is because police stations ain’t funded. That you see this my office everything inside I bought it down to plastic chairs. That government doesn’t allocate money for running of the offices. And that she won’t use her money to investigate the case I brought before her.How will you tell me to change my statement that I should lie. If I who brought case is asked to pay 30k what about the person I reported. Omo I stayed till he was released and we left together. Initially she said I can’t tell her what to do, I should just go and write withdrawal letter. Omo I wrote that I am not interested in the case because I dont trust the police and I can’t lie. Madam immediately saw my lengthy reply and asked me what I was writing and took me to her office where she turned on her phone to record our conversationOne calabar one was forming my sister, IPO that she is was claiming good women paining the DC0 as the wicked woman who just wants money but na she come tell me price to pay and na she collect from the people who came to stand in for the guy.When I was leaving the women on the counter wanted to collect money to give the guy his things, I told him not to pay anything they told him to sweep. Omo I even felt bad reporting. The humiliation on people brought it didn’t allow me stay inside.I told them bail is free and they collected 10k. Bail is not free Bail is now 10k upward. Isheri police station return our 10k. DCO and IPO on duty of 24th November. Two women police officers collected 10k from who I reported before he was released.Isheri police station i want a refund of the 10k you took from a Nigerian who was to be investigated. I stood till he was released because I have lost hope in the system. 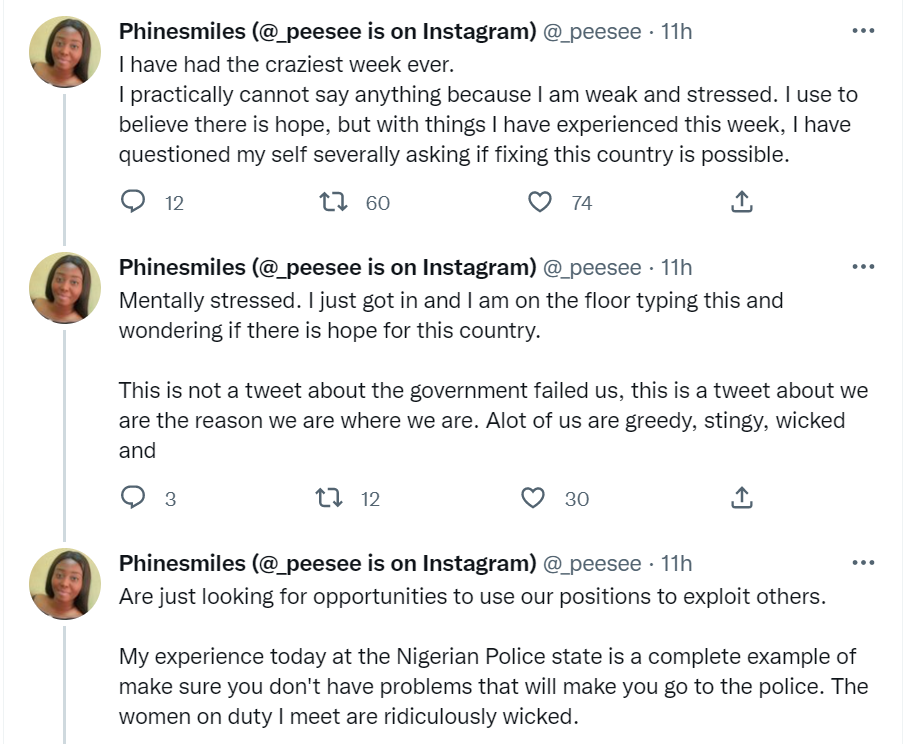 Benjamin who reacted to the claim, noted that the lady’s tweet shows she was never forced, harassed or bullied. He also stated that she is “part of the problem” for not calling the DPO or DCO. He wrote;  You did not call the DPO. You did not call the PRO. From your narration, you were not forced, harassed or bullied. They made a demand and you gave in. You had the opportunity to go out and make a call but you gave in and come out to rant. You’re part of the problem. 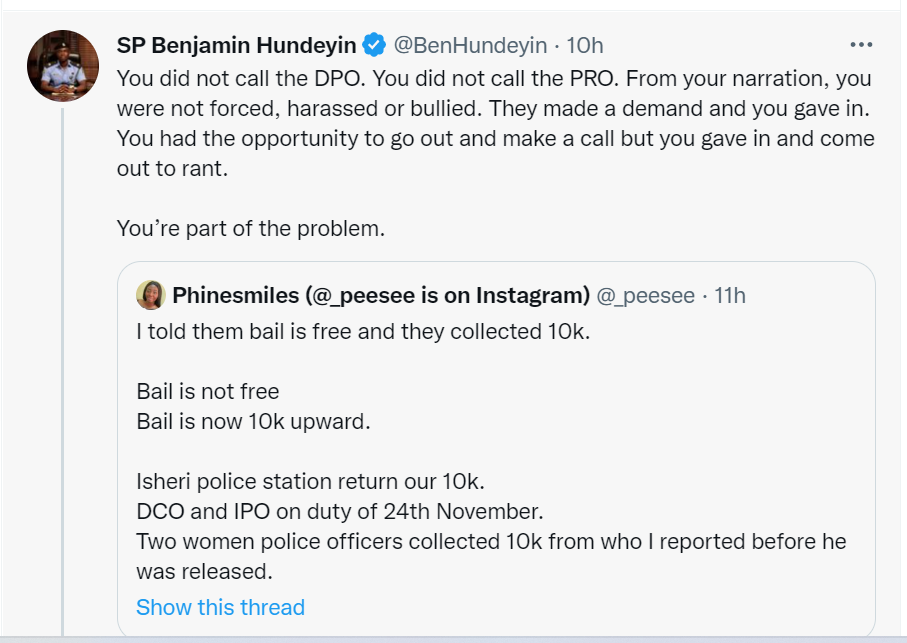 The lady responded by saying that she withdrew the case after the police demanded for money. She also asked why the police would demand for money before doing their job.  She wrote;  I sincerely believe you read my write up well. And in no line did I tell you I gave in. They demanded 30k from me for a case I reported. and I told them I will not pay a dime. And that is why I withdrew the case. Why must the DPO be called for of the Nigerian Police to do the right thing. I withdrew the case and your men went behind my back to collect 10k from the guy I reported before he was released. He was told if he doesn’t pay they won’t release him. Responding to this, Benjamin wrote;  Why shouldn’t the DPO be called? Every organization has reporting/complaint channels in case you’re not satisfied with their service. You refused to take advantage of that. They report to a superior. And you were a call away. 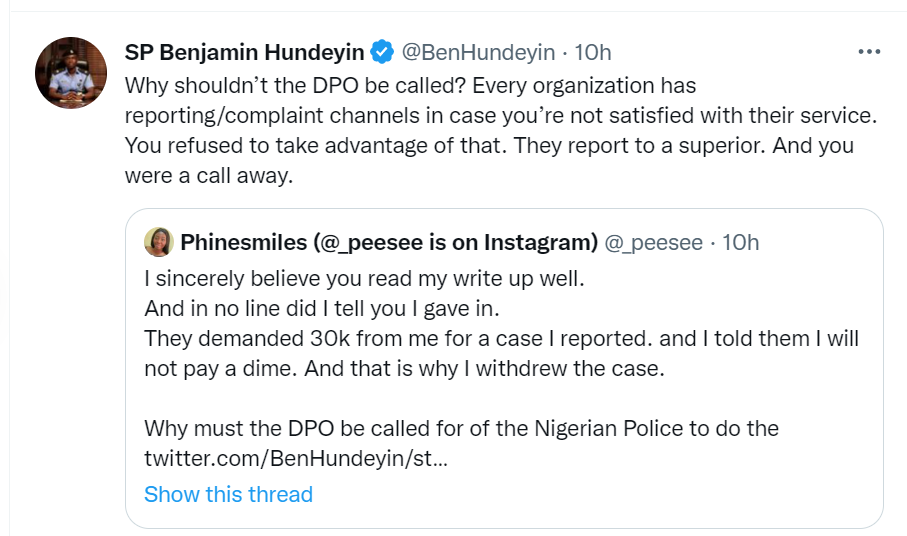 The post Youre part of the problem – Lagos Police PRO tackles lady who demanded a refund from the police after a 10k bail was paid appeared first on Linda Ikeji Blog.
Uncategorized