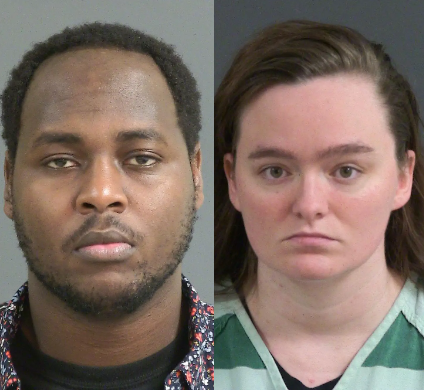 Two South Carolina parents have been arrested this week after they allegedly left their toddler home alone while they were on a trip to New York, authorities said. Donald Gekonge and Darline Aldrich, both 24, were booked in the Sheriff Al Cannon Detention Center on suspicion of unlawful conduct toward a child, WCIV reported. Police said they received a report on Nov. 17 that a 2-year-old child was alone in a Charleston apartment complex after Gekonge, the child’s father, had sent a text saying he was away in New York, WCBD reported. When the apartment managers could not contact anyone inside the apartment, an “emergency walk-through” was carried out, cops said. When they got into the house, they found the child, 2, sleeping on a bed in the living room, police said. Aside from a dirty diaper, the youngster appeared to be unharmed. EMS responders transferred the boy to MUSC Shawn Jenkins Children’s Hospital for further examination. Initial attempts to contact Gekonge and the child’s mother, Darline Aldrich, were unsuccessful. When Gekonge eventually called the complex himself, he told an officer he left the apartment early that morning and was only “a few states away.” Gekonge later claimed he was in New York “on business,” and assumed Aldrich was taking care of the toddler. He revised his story again later, confessing that Aldrich was also in New York “for an emergency.” Gekonge and Aldrich are in jail. Aldrich is being held on $75,000 bond, while Gekonge’s amounts to $50,000.The post South Carolina parents arrested after they left toddler home alone while they travelled to New York appeared first on Linda Ikeji Blog.
Uncategorized