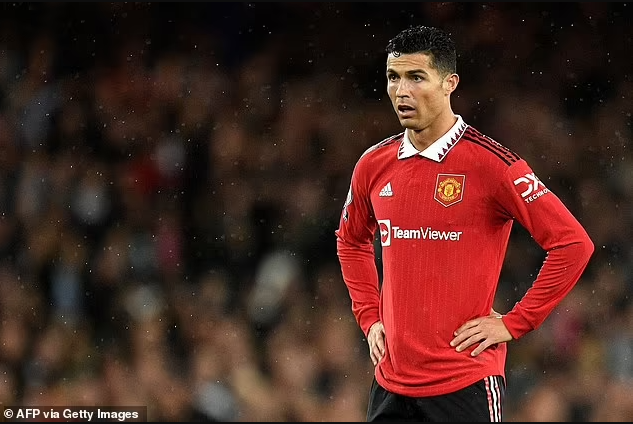 Cristiano Ronaldo has reportedly been hit with a £50,000 fine and a two-match ban by the FA after smashing a fan’s phone earlier this year. Back in April, Ronaldo appeared to slap the hand of Jacob Harding as he stormed down the tunnel, damaging the boy’s phone just after Manchester United’s defeat to Everton at Goodison Park.  Following his actions, Ronaldo posted an apology to his Instagram page. ‘It’s never easy to deal with emotions in difficult moments such as the one we are facing,’ he wrote. ‘Nevertheless, we always have to be respectful, patient and set the example for all the youngsters who love the beautiful game. ‘I would like to apologise for my outburst and, if possible, I would like to invite this supporter to watch a game at Old Trafford as a sign of fair play and sportsmanship.’    The 37-year-old was interviewed by police in relation to alleged assault and criminal damage and received a caution for his behaviour. Ronaldo also looked to apologise to Harding in person, but the mother of the 14-year-old autistic boy Sarah Kelly refused, leading to a 10-minute phone call, with Kelly later branding the superstar as ‘arrogant’. ‘He asked me if I would like to come down and meet his family,’ she told The Mirror. He said, “I’m not a bad dad”. I said to him, “I never said you were a bad dad”. ‘He said, “I had a terrible upbringing, I lost my dad”. I said to him, “Everybody has a sob story Ronaldo, I lost my dad young, I’ve had cancer”. ‘He kept calling me Jack and didn’t even know my name and I said, “My name is Sarah” and he said, “Oh, Sarah, I’m sorry”. ‘He never referred to Jacob by his name either, it was always “the boy”. “I know the boy’s got problems”, he said. I told him, “He hasn’t got a problem, he has a disability, you’re the one with the problem”.  Sarah described Ronaldo as the ‘most arrogant man I’ve ever spoken to’ and feels that he has ‘got away with it’. The FA have now concluded their investigation, and handed Ronaldo a hefty fine as well as a suspension, as reported by The Mirror.  While the investigation was ongoing last month, it was reported that Ronaldo would accept an improper conduct charge from the FA, but was determined to fight the threat of a potential ban. It remains unclear whether he will dispute the punishment handed down. The charge comes just a day after he ended his second spell at United following his bombshell interview with Piers Morgan where he criticised the club. United announced that Ronaldo’s contract had been terminated by ‘mutual consent’ on Tuesday evening November 22. The post Update: Cristiano Ronaldo is hit with a 50,000 fine and a two-match ban after he smashed a fan’s phone following Man United’s defeat against Everton in April appeared first on Linda Ikeji Blog.
Uncategorized