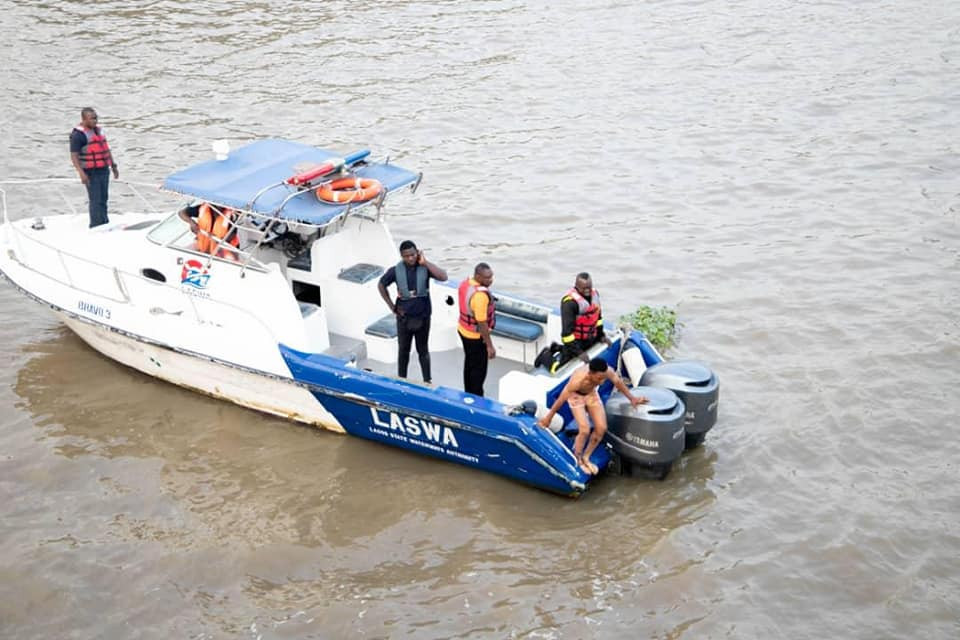 The Lagos State Government says it will today, Friday November 11, continue its rescue operation for the yet-to-be-identified lady who plunged into the Lagos Lagoon on Thursday, November 10, after efforts to find her body yesterday, failed. LIB had reported that the lady alighted from a taxi after a heated argument with her fiancé, headed for the railing of the bridge, and scaled it into the lagoon. Read here. Confirming that the search operation was called off by 7pm on Thursday, the state Commissioner for Information and Startegy, Gbenga Omotosho, said;”The rescue teams called off their search by 7pm because it was already dark. They will continue the search tomorrow (Friday); you know it is water, the wave would have taken the body somewhere else. But we will search everywhere.”” In a statement released, the Permanent Secretary of the Lagos State Emergency Management Agency, Olufemi Osanyintolu, said the taxi driver stated that the young lady was having a heated argument with her fiance before she plunged. “Upon the arrival of the Lagos Response Team at the incident scene, investigation revealed that a lady in her late thirties plunged into the Lagos lagoon.Further investigation revealed that the lady alighted from a taxi on the bridge and plunged into the lagoon.The driver of the taxi claimed she was having a heated conversation with her fiancé before alighting from the car.The LRT, men of the Lagos State Fire and Rescue Services, LASWA and officials of the Department of State Services are currently on ground working together to search for the victim.”he said  The post Lagos state govt to continue search operation for lady who jumped into Lagoon after being unable to find her body yesterday, as emergency agency boss says she was in a heated argument with her fiance before jumping appeared first on Linda Ikeji Blog.
Uncategorized