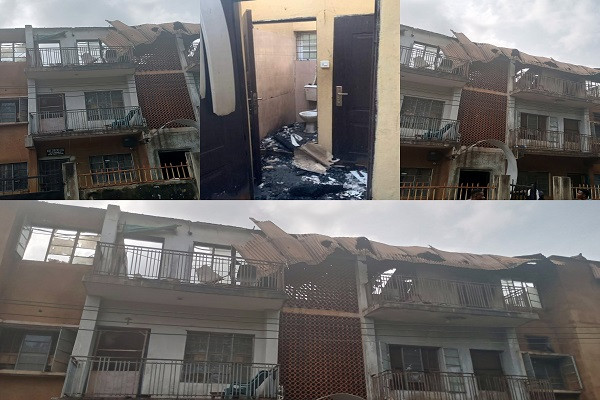 A two-storey building at Bigard Seminary Avenue by Hassan Lane Uwani, Enugu state, has been set ablaze by a 39-year-old mentally deranged lady.  The lady, whose mental breakdown was said to have started since 2017, was said to have run berserk when her parents attempted to send her to a psychiatric hospital in Enugu. The suspect who lives with her parents on the last floor of the two-storey building, started causing trouble lately, a development that forced her parents to invite policemen to help take her to the hospital. An eyewitness told The Nation;  “But when the policemen came early this morning, and the lady noticed that she was about being taken away, she took the gallon containing fuel and poured the content everywhere.“When the policemen climbed up the building, the lady lighted up the place. Her parents, who were coming up with the policemen and the cops themselves all ran for their lives.“Her mother’s shout of fire helped us to know that something was wrong. But, soonest, men of the Enugu State Fire Service rushed here and put out the fire that already consumed the two flats up.“The fire men were able to save the entire building from burning completely.” While no life was lost in the incident, the inferno however destroyed properties worth millions. The fire affected the last floor of the building and would have spread to the entire house and adjoining buildings but for the alarm raised by the residents. Firefighters quickly responded to the alarm and brought the situation under control immediately. The lady who was later rescued from the burning fire, has been taken to the Enugu Neuropsychiatric Hospital.The post Two-storey building set ablaze by mentally challenged woman in Enugu appeared first on Linda Ikeji Blog.
Uncategorized