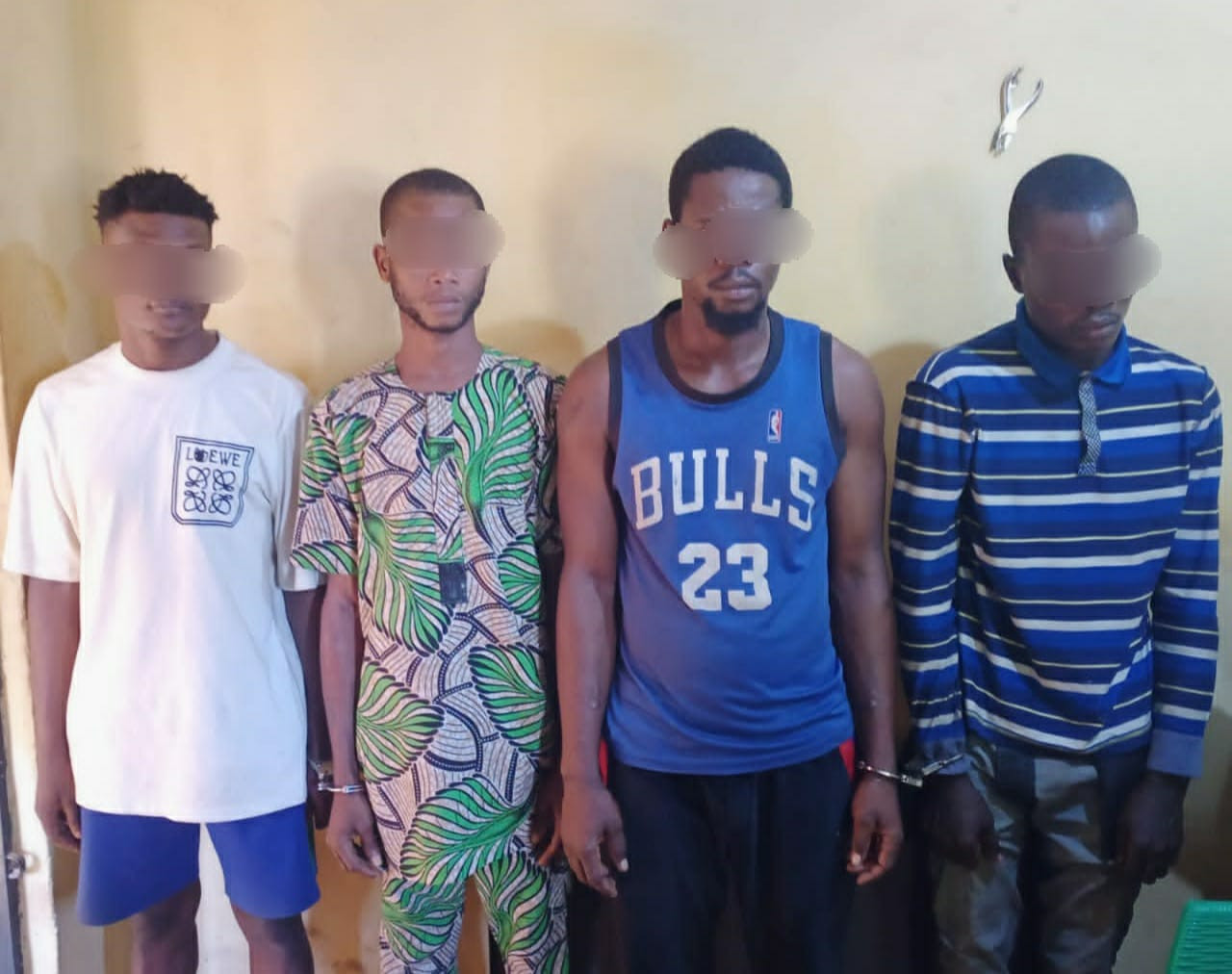 Operatives of the Ogun State police command have arrested four men over the sudden disappearance of a 36-year-old woman identified as Adebayo Aminat Keji who has gone missing since on the 16th of September 2022.A statement by the police command’s spokesperson, SP Abimbola Oyeyemi, says the suspects, Azeez Raimi, 21yrs, Yusuf Saheed 33yrs, Awodero Michael 27yrs and Soneye Lateef 39yrs, were arrested following a complaint lodged at Shagamu divisional headquarters by the elder brother of the victim, one Ahmed Adebayo, who reported that the victim left home since on the 15th of September and never returned.”Upon the report, the Commissioner of Police, CP Lanre Bankole, directed the anti kidnapping unit of the state Criminal Investigation Departments to unravel the mystery behind the sudden disappearance of the woman.In compliance with the CP’s directive, the SP Taiwo Opadiran led team embarked on technical and intelligence based investigation, which led them to one Soneye Lateef an hotelier, whose hotel facility the victim was seen last.On interrogation, the hotelier admitted that the missing woman was in his hotel on that day on the invitation of her friend one Bose Fajebe, who came to the hotel with her boyfriend. The said Bose Fajebe invited the missing woman to join them, but as soon as she arrived, the hotelier picked interest in her and started having a romantic discussion with her. While the two of them were discussing, Bose and her boyfriend left them and went away.The hotelier further explained that the missing woman also left not quite long after her friend had left, and later in the night, he also  left the hotel with two of his friends namely Saheed Yusuf and Michael Awodero to meet a herbalist   Azeez Raimi who is to carry out an Ifa divination ritual for them, and that they were all at the shrine throughout the night. But contrary to his claim that the missing woman was not with them at the shrine, the Ifa priest confirmed that he saw the woman in the vehicle with Soneye Lateef and Yusuf Shaeed outside the shrine and that they later left with the lady in the night to somewhere he didn’t know, only for them to come back early in the morning without the lady.He also gave a vivid description of the woman he saw, and when her photograph was shown to him, he confirmed it as the woman he saw with Soneye Lateef and Yusuf Shaeed. Awodero Michael also corroborated the herbalist statement that they were all at the shrine throughout the night, but the hotelier and his friend Shaeed who is an internet fraudster left the shrine with the woman in the night and came back in the morning without her” the statement in part read Abimbola added that further investigation revealed that the woman must have been used for ritual purposes.  He stated that the state Commissioner of Police, CP Lanre Bankole has ordered that the suspects be charged to court without further delay. The post Four arrested over sudden disappearance of 36-year-old woman in Ogun appeared first on Linda Ikeji Blog.
Uncategorized