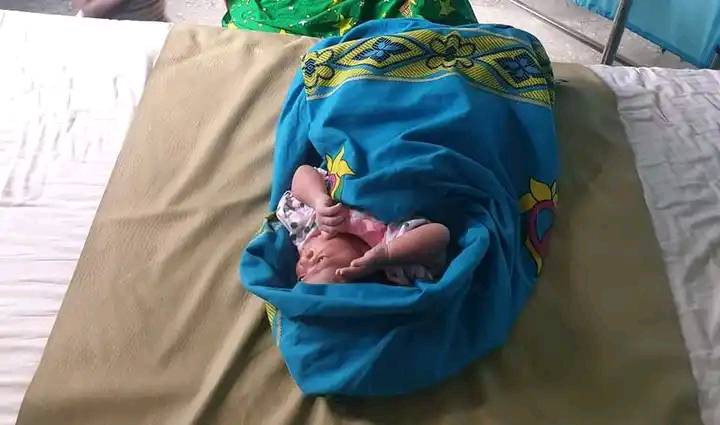 One of the babies born at the St. Michael’s College IDP camp in Oleh, Isoko South Delta State Government said it recorded 22 newborn babies at the various internally displaced persons (IDP) camps in the state. Secretary to the State Government and Chairman of the Inter-ministerial Flood Management Committee, Chief Patrick Ukah disclosed this at a news conference in Asaba on Wednesday, November 9, 2022.  He said that the loss recorded by the state would have been more catastrophic if not for the proactiveness of the state government. “It is interesting to note that this year’s flood is far more than what we experienced in 2012 but we give God the glory that the proactiveness of the state government has really helped us in managing this year’s flood,” he said. “We started our sensitization very early and we had stakeholders engagement with traditional rulers, community leadership, school and everybody that we needed to meet. “Many people responded by moving away from the low planes but as expected some people who hold some traditional beliefs held on to their ancestral homes. “But through our proactiveness the Ministry of Environment was directed to open up the cannals leading to the Niger River and DESOPADEC was also handy in this regard as they opened up cannals around their own operational areas. “We were able to set up 4 camps by DESOPADEC and 8 camps by the state government and we had about 21,000 IDPS in those eight camps and over 17000 in areas where DESOPADEC set up their own IDPs camps,” he said. He said the South and Central Senatorial Districts were most impacted by the flood but thanked God the state government was able to move the affected victims to the IDP camps. He commended the private sector response to the flood disaster, assuring that the state government would soon publish the names of the private sector donors in a full page advertorial in the newspapers for the state to appreciate them individually. “Now that the water has started receding and we have started planning their exit, by the grace of God we will do whatever it takes to assist them to get back to normal life irrespective of whatever they must have lossed to the flood. “We thank God that we didn’t have so many deaths and we hada lot of deliveries up to 22 babies in the different camps. “Yes we recorded some deaths and we are still compiling bt we recorded one death at Onne camp and it had nothing to do with the flood it was basically the personally illness that the person had before now. In Patani, some travellers lost their lives while travelling towards the Port Harcourt Bayelsa Road, while 4 deaths were recorded in Isoko and one in Ugbolu. “Apart from these deaths our camps remains very active and by the grace of God we have continued to keep them very happy and we hope to continue doing so until we come to the end of camp which by the grace of God is in sight,” Ukah stated. He said the loss associated with flood was unquantifiable adding that the state government was yet to receive any money from FG other than some relief items from NEMA. He said the NIMET flood projection for 2023 would be bigger than that of 2022 and called on the Federal Government to consider dredging the River Niger and Benue as well as building holding dams to cushion the effect of flooding in the country.   The post Flood: Delta State records 22 newborn babies in IDP camps appeared first on Linda Ikeji Blog.
Uncategorized