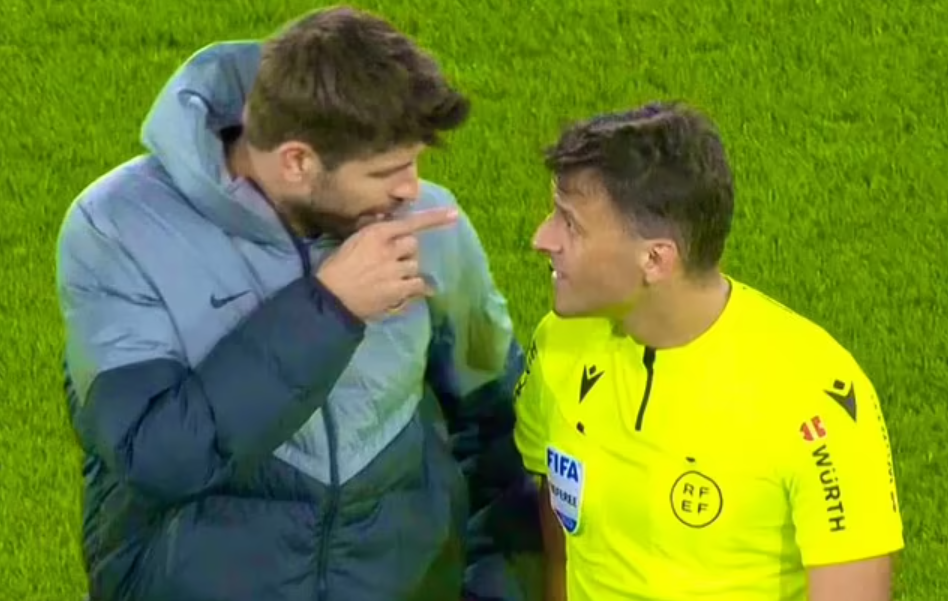 Gerard Pique’s career ended in an embarrassing manner after being sent off before even entering the pitch during Barcelona’s La Liga clash at Osasuna on Tuesday night, November 11.  The Spanish defender was named as a substitute for the match, with any appearance from the bench set to be his last before retirement. A dramatic first half saw Barcelona striker Robert Lewandowski receive a second yellow card for an elbow on David Garcia while the pair contested a bouncing ball. Pique, who was clearly unhappy with the officials, confronted the referee Jesus Gil Manzano at halftime. The eight-time La Liga winner proceeded to follow Manzano toward the tunnel before he was shown a red card of his own. The referee’s report claimed Pique said: ‘You are the referee who has most screwed Barcelona by some distance. ‘You are a f**king disgrace.’Gerard Piqué’s final moment as a professional footballer did not end the way anyone had planned Piqué was given a red card as a substitute in his final ever game after arguing with the referee.From his emotional farewell at the Camp Nou, to this…#LaLiga #OptusSport pic.twitter.com/VDz8HdAi4P— Optus Sport (@OptusSport) November 9, 2022 With the match being away from the Nou Camp, Pique had already bid an emotional farewell to the Barcelona supporters after captaining the side to a 2-0 win against Almeria in their previous fixture last Saturday.  In his speech to the crowd,  he said: “I was born here and I will die here. When you get older, you realise that sometimes to love is to let go. I’m convinced that I’ll be here again in the future.” Having played over 600 games for the club, and won 30 trophies, Pique’s figures for Barcelona are quite incredible, and now he has one last red card to add to the stat pack.The post You are a f****** disgrace!’: Barcelona defender, Gerard Pique is sent off in his final match as a footballer after half-timerantatreferee (Video) appeared first on Linda Ikeji Blog.
Uncategorized