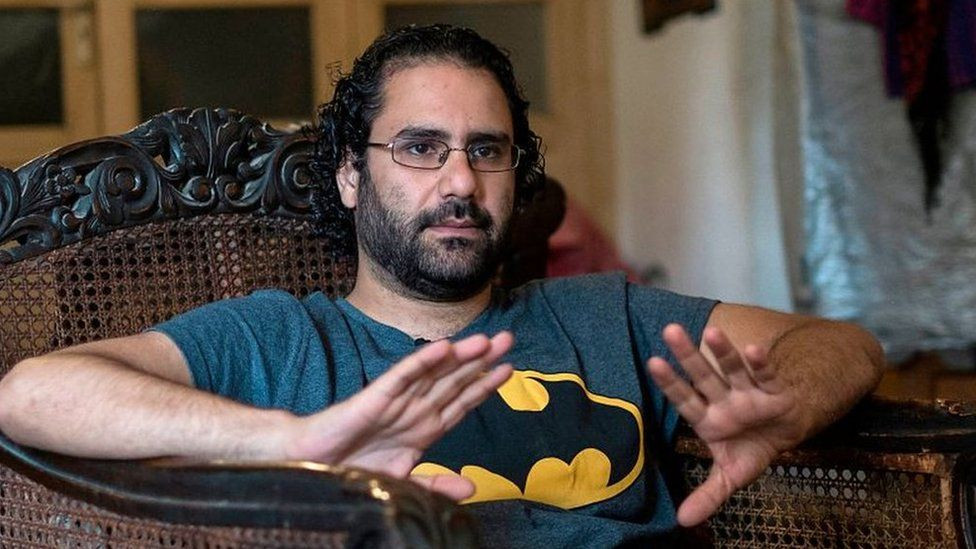 The UN has demanded Egypt immediately release a jailed British blogger who has been on hunger strike for seven months, warning his life is ‘in great danger’. Alaa Abd el-Fattah, a prominent Egyptian-British activist and blogger, was sentenced in December 2021 to five years in prison on charges of spreading fake news.  The 40-year-old has been on hunger strike for 220 days against his detention and prison conditions. On Sunday, Abd el-Fattah told his family he would stop drinking water  Abd el-Fattah’s family on Tuesday November 8, told world leaders at the COP27 climate conference that they had not heard from him since he spoke about his decision to stop drinking water, as U.N. High Commissioner for Human Rights Volker Turk called for his immediate release. ‘We don’t know where he is. We don’t know if he’s alive,’ Abd el-Fattah’s sister Sanaa Seif said during the UN climate summit, held at the Red Sea resort of Sharm el-Sheikh. Turk said Abd el-Fattah’s life is ‘in great danger’, adding: ‘His dry hunger strike puts his life at acute risk.’  Asked whether there was a risk he may have already died, given the lack of communication, Volk’s spokesperson said in Geneva: ‘We are very concerned for his health and there is a lack of transparency as well around his current condition.’ Abd el-Fattah’s mother said she did not receive a weekly letter from him on Monday when she visited the jail northwest of Cairo, despite waiting there for hours. British Prime Minister Rishi Sunak, who attended the COP27 climate talks on Monday, told Egyptian President Abdel Fattah al-Sisi that he hoped to see the issue resolved as soon as possible. However, Seif said Britain had not replied to her request for proof that her brother was alive. ‘I asked the British authorities to get us some proof that Alaa is alive and conscious, I did not get any response.’ Asked about the case on Monday, Egypt’s Foreign Minister Sameh Shoukry told CNBC that prison authorities would provide Abd el-Fattah with healthcare. Amr Darwish, an Egyptian member of parliament attending COP27, said Abd el-Fattah was convicted in court and questioned his family’s appeal for international support, which pro-government figures have portrayed as interference in Egypt’s internal affairs. Abd el-Fattah, a software developer from an activist family, was detained in the subsequent crackdown on Islamists, leftists, and liberals alike, and has been behind bars for most of the time since then.The post UN demands Egypt release British blogger who has been on hunger strike for seven months while held for ‘broadcastingfakenews’ appeared first on Linda Ikeji Blog.
Uncategorized