Hollywood actor, Sean Penn has given one of his Oscars to Ukrainian president Volodymyr Zelenskyy as a “symbol of faith”.The award will stay in Ukraine until the end of the war, according to the 62-year-old actor who won oscars in 2004 and 2009.Penn visited Ukraine for the third time on Tuesday, November 8.. During his meeting with Zelensky, the Fair Game star was also presented with the Order of Merit of the III degree by Zelenskyy, who thanked him for his “significant contribution” to the war effort. 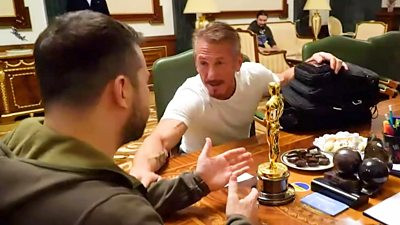 “If I know this is here with you, then I’ll feel better and stronger for the fight,” Penn told Zelenskyy while handing him the Oscar award.Penn was also honoured by having his name placed on a stone on the Walk of the Brave, which recognises “brave people who have stood with Ukraine from the very beginning”. His name will feature next to the list of many world leaders who have helped Ukraine during the conflict.A post on Zelenskyy’s Instagram page read: “American actor and film director Sean Penn @seanpenn came to Ukraine for the third time during the full-scale war already.“This time our meeting was special. Sean brought his Oscar statuette as a symbol of faith in the victory of our country. It will be in Ukraine until the end of the war.“It was with great pleasure that I presented Sean Penn with the Order of Merit of the III degree. Thank you for such sincere support and significant contribution to the popularization of Ukraine in the world.”Penn who is also a producer and director fled Ukraine in March while filming a documentary about the conflict.Watch the video below What is going… First Ben Stiller and now Sean Penn!?!? At war and you’re ticking off your Hollywood bucket list / topping up your trophy cabinet. https://t.co/gAqw4b6GD2— Bighead – UFC, Arsenal & Jags fan #BaalkeOut (@Fathead49892222) November 9, 2022The post Sean Penn gives one of his Oscars to Ukrainian president Volodymyr Zelensky (photos/video) appeared first on Linda Ikeji Blog.
Uncategorized