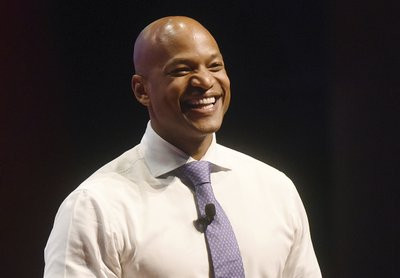 American politician and Democrat, Wes Moore has been elected Maryland’s first Black governor after defeating Republican Dan Cox in a state where Democrats outnumber Republicans 2-1. According to AP News, votes on Tuesday October 8, show that Moore defeated Republican Dan Cox, meaning he is now the first Black governor of  Maryland.  Wes Moore, a charismatic best-selling author and former head of the anti-poverty organization Robin Hood, is also now the third Black elected governor in American history.  During his victory, Moore spoke about his “leave no one behind,” slogan and said, “When I was an Army captain and led soldiers into combat in Afghanistan, we lived by a simple principle: Leave no one behind … Real patriotism means bringing people together. It means lifting each other up and improving each other’s lives.”  Moore’s running mate, Aruna Miller, also made history as by becoming the first immigrant to win the lieutenant governor’s office in Maryland. Moore’s win puts the governorship back in Democrats’ hands after two terms of Republican Gov. Larry Hogan, one of the country’s most popular governors. He now joins only Douglas Wilder of Virginia and Deval Patrick as the only Black governors elected in the country’s 246-year history.The post First Black American Governor elected inMaryland appeared first on Linda Ikeji Blog.
Uncategorized