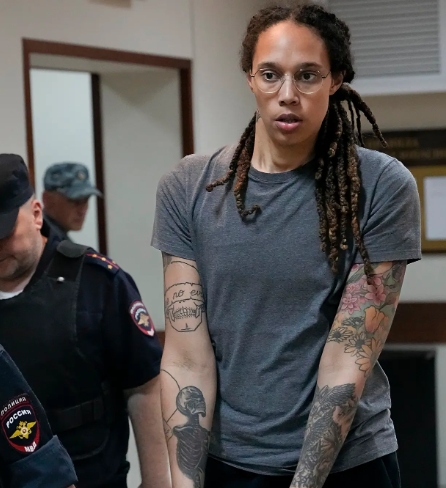 WNBA star Brittney Griner has been moved to a Russian forced labour camp. The basketball player, who was arrested in Russia for allegedly possessing cannabis oil, was sentenced to 9 years in a Russian jail and she appealed the sentence but it was denied by a Russian court last month. The White House released a statement early Wednesday morning, Nov. 9, condemning the move to transfer Griner to labour camp. “Every minute that Brittney Griner must endure wrongful detention in Russia is a minute too long,” White House Press Secretary Karine Jean-Pierre said in the statement. “As the Administration continues to work tirelessly to secure her release, the President has directed the Administration to prevail on her Russian captors to improve her treatment and the conditions she may be forced to endure in a penal colony,” the statement continued. “The U.S. Government is unwavering in its commitment to its work on behalf of Brittney and other Americans detained in Russia – including fellow wrongful detainee Paul Whelan,” Jean-Pierre concluded. Griner will face harsh conditions in the forced labor camp, and it will be difficult for her family to contact her or even know her exact location. Griner was visiting Russia to compete in the WBNA offseason in February when Russian authorities found cannabis oil in her luggage. She was promptly arrested for possessing the vape cartridges and was later sentenced to nine years in prison. The U.S. government has engaged in prisoner swap talks with Russia, but there appears to be no significant progress. “Putin’s Playbook” author Rebekah Koffler told Fox News that tense relations over the Russo-Ukrainian War have impacted the negotiations. “This is another case that demonstrates that Americans are not safe in Russia, especially Americans of Russian descent and especially now when the relations between Moscow and Washington are at the lowest point in history, including the Cold War,” the intelligence expert said last month.  The post Brittney Griner transferred to Russian forced labour camp appeared first on Linda Ikeji Blog.
Uncategorized