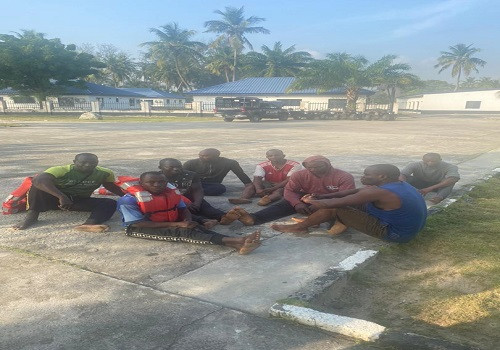 The Nigerian Navy Ship (NNS) BEECROFT has rescued 10 crew members from a fishing trawler in Lagos. Christened OLOKUN XII, the vessel capsized within the Lagos channel in the early hours of Monday, November 7, 2022 while it was being towed by another fishing trawler. Western Naval Command’s (WNC) Information Officer, Commander Edward Yeibo, who confirmed the incident in a statement, said the fishing trawler collided with a Merchant Vessel, MSC CORUNA, which led to its capsize. “Fortunately, NNS BEECROFT patrol team was on routine patrol which led to the prompt rescue of 10 crew members from the trawler. Thereafter, the rescued crew were handed over to the officials of the company, named Barnaly Fishing Company Limited,” he said. Yeibo said the Commander, NNS BEECROFT, Commodore Malami Haruna, commiserated with the fishing company over the “sad incident”. Haruna urged sea-farers to navigate with caution and due consideration to the international regulation for prevention of collision when transiting within the nation’s maritime domain. The post Nigerian Navy rescues 10 crew members from capsized fishing trawler in Lagos appeared first on Linda Ikeji Blog.
Uncategorized