Five farmers have been killed while dozens sustained severe gunshot wounds in a fresh banditry attack in Munya Local Government Area of Niger State. It was gathered that the attack occurred in Zazzaga, Lagbe, Cibani and Injita communities, around 6am on Monday, November 7, 2022.  According to a source from the community who spoke to Daily Trust, the farmers were attacked on their way to the farm to harvest their crops. The source also said dozens of residents, especially women and children have fled their homes.  “Some of the people killed were going to farm early in the morning when they met them (bandits) on the way. They killed five people and injured others. They later went to villages but many people had already fled,” he said.  “As I am speaking with you, I am personally in Minna because these people have resumed since we started harvesting. They appear when we are on our farms harvesting. Recently, I narrowly escaped. So, I moved to Minna. Many of our people have fled,” he said. Another resident, Shuaibu Aliyu said bandits also rustled many cattle belonging to farmers in Zazzaga and adjoining communities. Meanwhile, the Chief of staff, Rafi LGA, Mohammed Mohammed has alerted residents that bandits on about 70 motorcycles were seen on Monday morning November 7, with sophisticated rifles moving towards the Hana Wanka and Kukoki axis of Shiroro LGA. “We received the news of the movement of the bandits in large number riding on about 70 motorcycles , carrying sophisticated rifles moving as usual from their regular abode in Hana wanka / kukoki axis of Shiroro LGA,” he wrote.  “Every inch of their movement is captured by our numerous council assistants on security and moving in the same regular routes Sufana – maidubara – Rafin Gora – Gwabtai and to Kwange axis that will easily lead them to the highway leading to Minna at a particular spot called Kwanan Barau. “Undoubtedly the efforts of the military and other security agencies is commendable, as they were stationed in different strategic location but the bandits once again proved to them that they are the Masters of the terrain. “As I’m writing this report , the bandits are presently at Agwa mailamba and injin Barde villages searching house to house looking for cows for rustling. “Today Monday is exactly one week when they crossed the same highway and returned on Tuesday with large herds of cattle, many bandits met their Waterloo as they are exterminated brutally by the military might and aerial bombardment by the military jets “Scores of lives were lost at the sides of the security agencies , where about 5 vigilantes lost their precious lives in the battlefield. “We advised the motorist and other travellers to be extra cautious today and tomorrow when they are expected to returns back with their rustled cows and will likely want to cross the highway again. “I know for sure the military and the vigilantes will engage them from today and tomorrow and vicious fight will undoubtedly take place on our major road to Minna very close to Zungeru bridge. “I also got another report that Zazzaga and Chibani villages in Munya LGA was attacked and large troop of the military are engaging them as I’m writing this report. “Let us continue to pray for our military officers , our police , our vigilantes and more importantly our air components units of the Nigeria air Force, they needs our prayers , our support and indeed our cooperation to volunteer sensitive information about the activities of this Hydra headed monster. “May Allah intervene and help our gallant troops to totally exterminate and annihilate the heartless and venomous bandits. Inshaa Allah they will all not return alive.” he added. 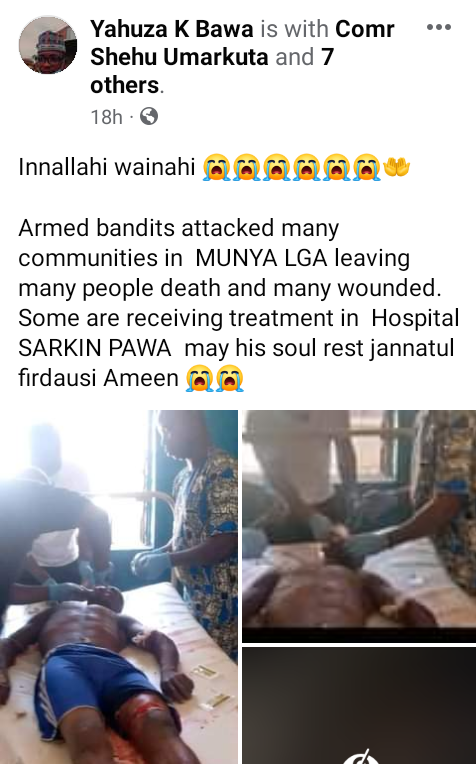