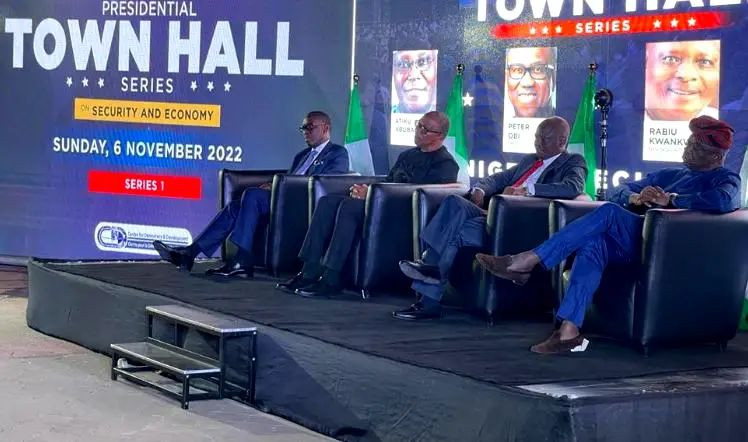 There was mild drama at a presidential town hall meeting which held at the Transcorps Hilton, Abuja, after PDP presidential candidate, Atiku Abubakar failed to show and instead, sent his running mate, Gov. Ifeanyi Okowa of Delta state. The event was organised by the Centre for Democracy and Development and Arise Television on Sunday November 6, and Peter Obi of the Labour Party; Rabiu Kwankwaso of the New Nigeria Peoples Party, (NNPP) and presidential candidate of the Peoples Redemption Party, Kola Abiola, attended the event in person.  APC presidential candidate, Bola Ahmed Tinubu was also absent and there was no representative for the ruling party. Some spectators however disrupted the event, stating that they wanted only presidential candidates to participate. When calm was restored, all four candidates including Okowa, were allowed to speak to the audience for a few minutes. Okowa later explained why his principal, Atiku Abubakar didn’t show up; “Atiku Abubakar duly obtained permission from the organisers of the town hall meeting for him to be represented and that permission was duly given. Atiku Abubakar is outside the country and he has asked me to represent him.” he said“I think that answers the question to earlier concerns raised. This is just a town hall meeting not the actual debate.” he added Watch the video below…      View this post on Instagram           A post shared by Lindaikejiblog (@lindaikejiblogofficial)The post Protest at Presidential Town Hall meeting after PDP presidential candidate, Atiku Abubakar failed to show and instead, sent his running mate, Ifeanyi Okowa (video) appeared first on Linda Ikeji Blog.
Uncategorized