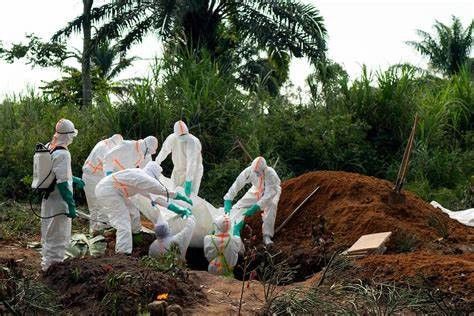 The World Health Organization has announced that six new cases of Ebola have been found in Uganda, just after the country reported its first fatality from the highly contagious virus since 2019. The cases confirmed on Thursday September 22, include a 24-year-old man who died this week after he developed a high fever, diarrhoea and abdominal pain, in addition to vomiting blood. After initially being treated for malaria, he was diagnosed as having contracted the Sudan strain of the Ebola virus. Seven other deaths are being investigated as suspected cases of a strain for which the authorities do not yet have a vaccine, officials said.  Abdou Salam Gueye, regional emergency director with the WHO Regional Office for Africa said in a statement; “So far, seven cases, including one death, have been confirmed to have contracted the Sudan ebolavirus.“Forty-three contacts have been identified and 10 people suspected to have caught the virus are receiving treatment at the regional referral hospital in Mubende.“Our experts are already on the ground working with Uganda’s experienced Ebola control teams to reinforce surveillance, diagnosis, treatment, and preventive measures.” Ugandan authorities have not yet found the source of the outbreak, or “patient zero” – the key first case. But they were able to pinpoint the epicentre of the outbreak, which is the central Ugandan district of Mubende, whose main town lies along a highway into the capital, Kampala. That travel link and several crowded artisanal gold mines there are concerning, Bbosa told the World Health Organization. Ebola, which is spread by contact with the bodily fluids of an infected person or contaminated materials, manifests as a deadly haemorrhagic fever. Symptoms include fever, vomiting, diarrhoea, muscle pain and at times internal and external bleeding. Uganda last reported an outbreak of the Ebola Sudan strain in 2012.The post Uganda confirms six more cases of Ebola including one death appeared first on Linda Ikeji Blog.
Uncategorized