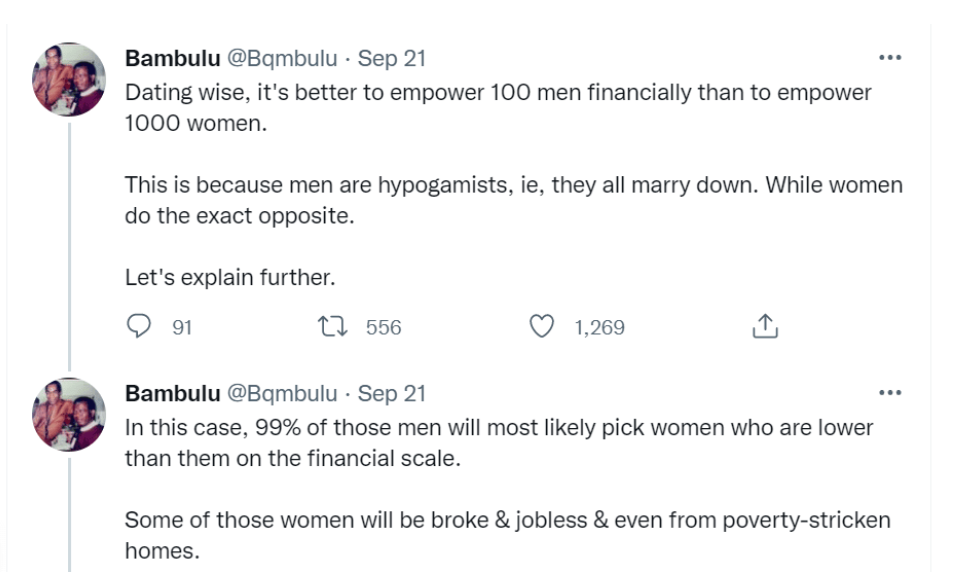 A Twitter user has said that it is better to financially empower 100 men than to empower 1000 women.  @Bqmbulu in his tweet opined that men are hypogamists (marry down), while women do the exact opposite. He also claimed that women empowerment doesn’t distribute wealth. See his tweets below…… “Dating wise, it’s better to empower 100 men financially than to empower 1000 women. This is because men are hypogamists, ie, they all marry down. While women do the exact opposite. Let’s explain further.”In this case, 99% of those men will most likely pick women who are lower than them on the financial scale. Some of those women will be broke & jobless & even from poverty-stricken homes.”Thus we see that the man’s money doesn’t stay with him alone. He transfers his wealth to his woman & his in-laws.”On the otherhand, 100% of those women will aspire to settle for men who are richer than them. While some are lucky to get richer men, some get men who are equally as rich as them & the rest who couldn’t get their first choice often stay single, rich & unmarried.”So we can say that the chances of those 1000 women settling for a broke, jobless man & empowering him & his family is next to zero.”This is why I always say that there’s no honour in a woman’s love. Her love is always selfish & self-seeking.”To buttress further, when you check the list of richest women in the world. Women who came from nothing made the list because they were beneficiaries of either divorce or inheritance from their late partners.”Whereas this is never the case with the men’s list. Says a lot about the gender that is more caring, selfless & sacrificial. Women empowerment doesn’t distribute wealth.”The post Twitter user says it’s better to financially empower 100 men than to empower 1000 women appeared first on Linda Ikeji Blog.
Uncategorized