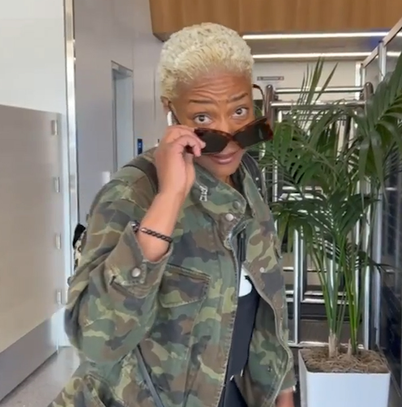 Tiffany Haddish says she doesn’t have a single job after being accused of molestation, even though the lawsuit alleging that has been dismissed. The actress spoke to TMZ on Wednesday, September 21, at the Los Angeles International Airport. A certain Jane Doe had claimed that Tiffany Haddish and Aries Spears roped her and her brother into inappropriate sexual skits as children. The young woman has now dropped her claim. Despite dropping the claim, Tiffany tells TMZ that she has lost everything in the wake of this. She said she is relieved now that the saga is over but noted her main concern was the actual accuser, as well as her brother. Recall that Tiffany and Aries were accused of including the girl and her brother in filmed sketches when they were kids, In one of the sketches, Tiffany allegedly had the girl imitate fellatio on a sandwich and in another, her brother was allegedly the subject of a pedophile’s fantasy, played by Aries. Tiffany denied it at first, calling it a shakedown, but she later expressed regret for her role. The post Tiffany Haddish says she has lost all her jobs over molestation suit appeared first on Linda Ikeji Blog.
Uncategorized