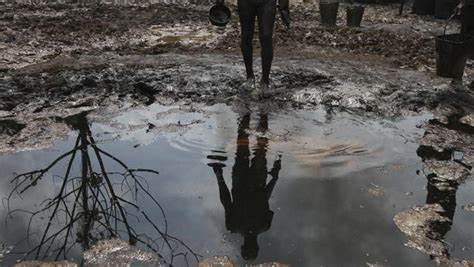 The federal government has given the number of litres of crude oil stolen daily in the country.  At an investigative public hearing on “Oil lifting, theft and the impact on petroleum production and oil revenues” chaired by Senator Bassey Akpan (YPP – Akwa Ibom North East), the Executive Commissioner, Corporate Services and Administration of the NUPRC, Mr Jide Adeola, said about 159 litres amounting to 600,000 barrels of crude oil are illegally siphoned per day. Adeola further revealed that Nigeria produces 1.23million barrels of crude oil per day as against its 1.8million barrels target, leading to a total revenue loss of about $2.1billion or N877billion. National President of PENGASSAN, Festus Osifo also claimed that oil theft was a collaborative crime between security personnel assigned to protect oil installations and the locals running illegal refineries. Osifo called on petroleum regulatory agencies and various security outfits to be alive to their responsibilities to curtail the menace. He said;  “One of the greatest problems we have, which nobody has highlighted is that there is strong connivance of our security forces in the crime.“There is no doubt about this. From our Army to our Naval officers, we have information that they pay their superiors to post them to some areas in the Niger Delta.“I can authoritatively inform this committee that men of the Nigerian Army and the Navy pay their superiors to be posted to Niger Delta.“Even when the former Commander of the Amphibious Brigade in Port Harcourt was removed, many of the men in the Command resisted being posted out due to lucrativeness of their operational areas.“I think the people who have a solution to this problem are not even the ones sitting here. They are the ones you will invite behind the camera.” Chairman of the Adhoc Committee, Senator Samoan said: “The quota from the Organisation of Petroleum Exporting Country is about 3.3 million barrels per day but we are producing less than 1.3million per day. How do we meet our fiscal challenges?”The post 95.4m litres crude oil stolen daily – FG appeared first on Linda Ikeji Blog.
Uncategorized