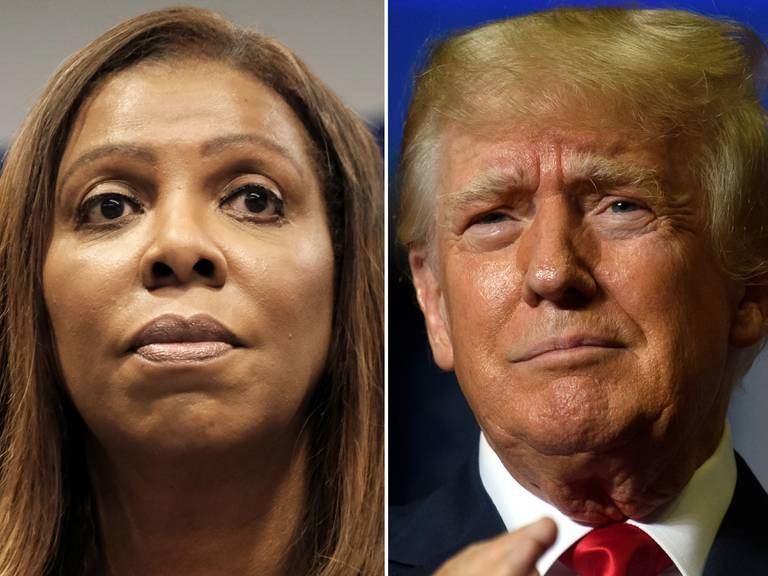 New York Attorney General, Letitia James has announced a bombshell $250 million civil fraud lawsuit  against former US president, Donald Trump, his adult children and his company – the Trump organization. The AG’s lawsuit to be filed in New York State Supreme Court in Manhattan on Wednesday, September 21 accuses the Trump Organization and top company executives of purposely misrepresenting the value of assets belonging to the former president’s name including skyscrapers, mansions, and golf courses by hundreds of millions of dollars over decades to enrich itself. The suit aims to remove Trump and his children from their roles with the organization after he “falsely inflated his net worth in order to enrich themselves through numerous acts of fraud and misrepresentations.” Trump and the Trump Organization used false and misleading statements “repeatedly and persistently” to induce banks to lend money on favorable terms,  the lawsuit said. “Donald Trump falsely inflated his net worth by billions of dollars to unjustly enrich himself, and cheat the system, thereby cheating all of us,” James said at a press conference Wednesday. James added that her office is making criminal referrals against Trump and his adult kids on top of the $250 million civil suit, which seeks to bar Trump, his kids and his company from taking part in any commercial real estate transactions in New York and would also bar Trump and his business from seeking loans from banking institutions registered in the state for five years.On Wednesday, James said she was “only scratching the surface” as she detailed scheme after scheme related to inflating the value of Trump-owned properties across the country.Among them, Trump’s Florida resort Mar-a-Lago, which Trump valued at nearly 10-times its actual worth.“The club generated annual revenues of less than $25 million and should have been valued at about $75 million,” James said. “However, Mar a Lago was valued as high as $739 million.”Trump and his company also “routinely ignored legal restrictions on development rights and marketability,” according to the suit. The former “Apprentice” host even exaggerated the size of his penthouse apartment atop Trump Tower in Midtown, reporting it to be around 30,000-square-feet when in actuality the tri-plex is only 11,000-square-feet, James said.The lawsuit stems from a three-year civil investigation by James’ office into allegations of widespread fraud at the company and names Trump as well as his children, Ivanka, Eric and Don Jr. and other company executives as defendants. The AG’s office deposed Trump and his son, Eric, in the probe, with both invoking their right not to testify hundreds of times under questioning. During the investigation, Trump was also held in civil contempt and fined $110,000 for failing to meet evidence deadlines. If the lawsuit is succesful, it could sound the end for Trump’s namesake company in his home state, a business founded by his grandmother and his father almost 100 years ago.The post New York Attorney General announces bombshell $250 million lawsuit against Trump, his children, and Trump Organization over fraud allegations appeared first on Linda Ikeji Blog.
Uncategorized