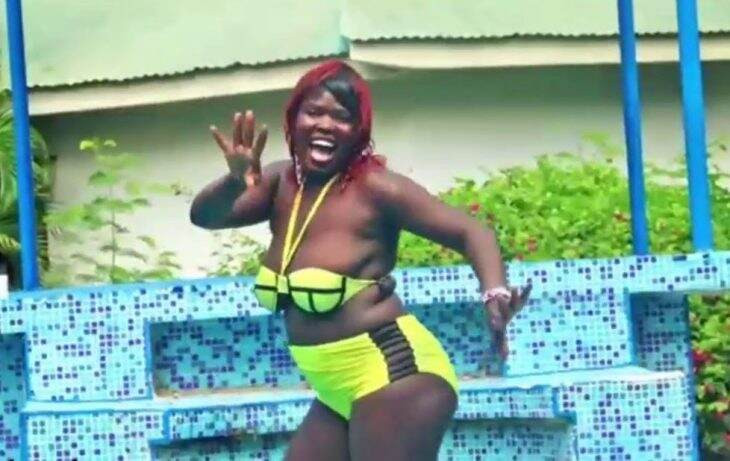 Singer Merceline Atieno aka Mercy Atis who became a viral sensation after her song ‘I Don’t Give a Damn’ went viral on social media in 2020, stripped naked after police officers raided her brothel on Sunday September 18.  Kenyan police officers raided the brothel which was formerly an eatery joint in conjunction with  Kajiado County Liquor Licensing Board after being alerted by members of the public.  Mercy Atishttps://t.co/eFGbdJGyal pic.twitter.com/gAy0LwMSHl— KossyDerrickEnt (@KossyDerrick) June 8, 2022 It was gathered that tens of naked women were found entertaining revellers while smoking bhang (an edible preparation made from the leaves of the cannabis plant) . Others engaged in group orgies. After being told she was operating an illegal facility, Atis insulted the police officers, stripped naked and dared them to kill her.  The facility was shut down and Mercy Atis was subsequently arrested. She is currently being held at Kitengela police station. Chairman of the Liquor Licensing Board Jonah Marapash who ordered the immediate closure of the bar, said; “The orgy scenes we have witnessed in this club spell doom to our children. We thank members of the public for giving vital information about what has been going on in this club. We are on high alert to tame the operations of nightclubs and bars. We cannot allow open immorality in the name of business and we are going to close all strippers’ joints, revoke their licenses, and blacklist their owners.” Here are videos of Mercy Atis when she stripped naked below…. This is Mercy Atis @mercymusikKE, a lady who caused a stir last year after she was allegedly harassed by Kitengela OCS for operating a night club without a license. On this video, she was protesting after police bungled on her operating a brothel at the same club…. pic.twitter.com/YEKLfNf8ZU— Arume Ti Banyakwe (@RealMeru1) September 18, 2022after residents complained to the @NPSC_KE. Police arrived but were not able to arrest her after she striped. The girls too took off. Today it will be business as usual. @DCI_Kenya pic.twitter.com/4ZIAL8NdNr— Arume Ti Banyakwe (@RealMeru1) September 18, 2022The post Singer Mercy Atis strips naked after her brothel was raided by police (videos) appeared first on Linda Ikeji Blog.
Uncategorized