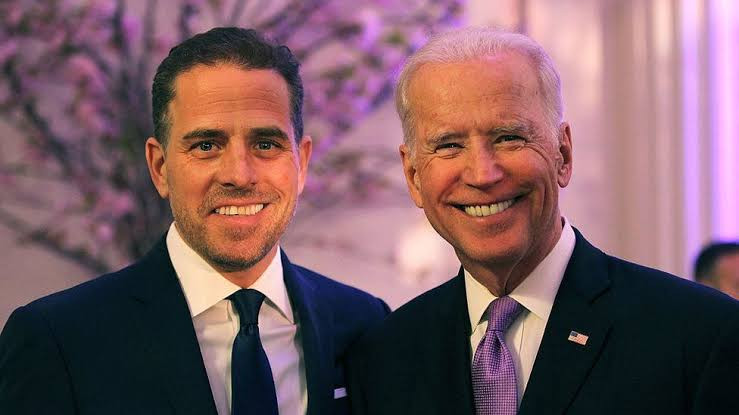 US President, Joe Biden has defended his scandal-plagued son Hunter and praised him for overcoming addictions to drugs and prostitution. In a CBS ’60 minutes’ interview that aired Sunday night, Biden told correspondent Scott Pelley that his son’s foreign business dealings did not cause any conflicts when Biden was vice president under Barack Obama.Hunter Biden’s foreign business ties were the subject of a federal tax fraud probe that had been heating up earlier this year but a Republican led senate committee cleared him of wrong doing. Asked by the correspondent if Hunter Biden’s work or past struggle with drugs could be a liability on the 2024 campaign trail, President Biden replied; ‘I love my son, number one,’ The president continued, ‘He fought an addiction problem and he overcame it, he wrote about it.”And no, there is not a single thing that I’ve observed, at all, that would affect me or the United States relative to my son Hunter.’Prosecutors were reportedly weighing whether charges should be levied but were also wary of Department of Justice guidelines that advise against bringing potentially politically charged cases to the forefront so close to an election.  in a new development, Senate Republicans on Monday, September 19, sent a letter to Attorney General Merrick Garland asking him to grant U.S. Attorney David Weiss, who is overseeing the Hunter probe, special counsel protections. ‘Given that the investigation involves the President’s son, we believe it is important to provide U.S. Attorney Weiss with special counsel authorities and protections to allow him to investigate an appropriate scope of potentially criminal conduct, avoid the appearance of impropriety, and provide additional assurances to the American people that the Hunter Biden investigation is free from political influence.’ the letter states. Watch the video below…HUNTER BIDEN: On “60 Minutes,” President Biden was asked if the troubles of his son Hunter Biden “have caused conflicts for you or for the United States.” pic.twitter.com/1bN6HiyF0U— Forbes (@Forbes) September 19, 2022The post ‘I love my son’ – Joe Biden insists son Hunter has not caused any conflicts for the US with his foreign business deals and praises him for overcoming addiction to drugs and prostitution (video) appeared first on Linda Ikeji Blog.
Uncategorized