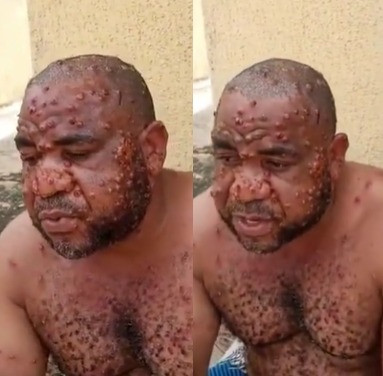 A Nigerian man diagnosed with Monkeypox disease has shared his experience. In a video shared on social media, the man who resides in Aba, Abia state recounted how he was misdiagnosed by some doctors until he went to the Federal Medical Center in Aba where a doctor made the right diagnosis of Monkeypox disease. Nigeria now has the highest number of Mokeypox deaths in Africa. Some facts about MonekyPox disease;Monkeypox is caused by monkeypox virus, a member of the Orthopoxvirus genus in the family Poxviridae.Monkeypox is usually a self-limited disease with the symptoms lasting from 2 to 4 weeks. Severe cases can occur. In recent times, the case fatality ratio has been around 3–6%.Monkeypox is transmitted to humans through close contact with an infected person or animal, or with material contaminated with the virus.Monkeypox virus is transmitted from one person to another by close contact with lesions, body fluids, respiratory droplets and contaminated materials such as bedding.Monkeypox is a viral zoonotic disease that occurs primarily in tropical rainforest areas of central and west Africa and is occasionally exported to other regions.An antiviral agent developed for the treatment of smallpox has also been licensed for the treatment of monkeypox.The clinical presentation of monkeypox resembles that of smallpox, a related orthopoxvirus infection which was declared eradicated worldwide in 1980. Monkeypox is less contagious than smallpox and causes less severe illness.Monkeypox typically presents clinically with fever, rash and swollen lymph nodes and may lead to a range of medical complications. Watch a video of the man speaking about the decease below…      View this post on Instagram           A post shared by Lindaikejiblog (@lindaikejiblogofficial)The post Nigerian man suffering from Monkey Pox narrates how he was misdiagnosed by multiple doctors as he opens up about the ailment (video) appeared first on Linda Ikeji Blog.
Uncategorized