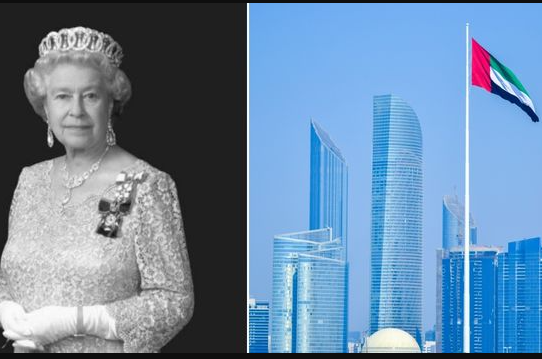 The United Arab Emirates has declared three day period of mourning over the passing of Queen Elizabeth II. In a statement, the Presidential Court said that the flags will fly at half-mast for three days, starting Friday, September 9, to Sunday, September 11. Her Majesty passed away on September 8, 2022, surrounded by her closest family members at her Scottish estate. She was 96 years old and had served as the Queen of England for 70 years.  The UAE President and Vice-President were among the first to pay tributes as the country mourns the passing of Queen Elizabeth II. His Highness Sheikh Mohamed bin Zayed Al Nahyan, the UAE President, called Queen Elizabeth a “close friend of the UAE” and added she was a “beloved and respected leader whose long reign was characterised by dignity, compassion and a tireless commitment to serving her country”. HH Sheikh Mohammed bin Rashid, Vice President and Ruler of Dubai, wrote, “We join the world in mourning the passing of Her Majesty Queen Elizabeth, a global icon who represented the finest qualities of her nation and people. Her incredible lifetime of service and duty to the United Kingdom is unparalleled in our modern world.” HH Sheikh Hamdan bin Mohammed, Crown Prince of Dubai, also shared a message, calling the royal a “Queen of love, wisdom, and humanity. The world will miss you”.The post UAE declares three-day mourning period over death of Queen Elizabeth II appeared first on Linda Ikeji Blog.
Uncategorized