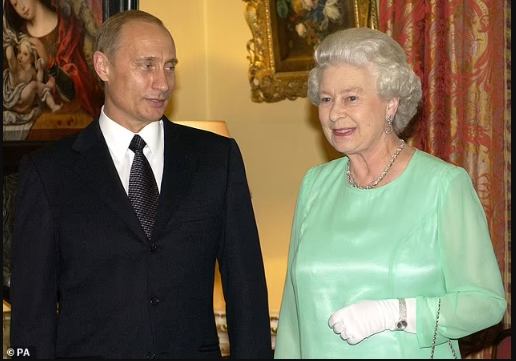 The Russian government has confirmed that President Vladimir Putin will not attend the Queen’s state funeral amid the estranged relationship between Russia and the West.  A Kremlin spokesman said a decision will be made on who will represent Russia at the service which is expected to take place on September 19 at Westminster Abbey.  Yesterday, Putin paid tribute to the monarch despite the his aggression in Ukraine which has caused relations between Russia and Britain to plummet to their lowest levels since the Cold War. The leader said: ‘The most important events in the recent history of the United Kingdom are inextricably linked with the name of Her Majesty. ‘For many decades, Elizabeth II rightfully enjoyed the love and respect of her subjects, as well as authority on the world stage. ‘I wish you courage and perseverance in the face of this heavy, irreparable loss. I ask you to convey the words of sincere sympathy and support to the members of the royal family and all the people of Great Britain.’ Meanwhile, a top Putin media chief has acted to block coverage of the Queen’s death on her Kremlin broadcasting network. Margarita Simonyan, head of sanctioned RT, posted on her Telegram channel: ‘Enough Queen news already, team. ‘So she died. Well, RIP. We all die. This is not our pain.’  The post Russia confirms President Putin will not attend the Queen’s state funeral appeared first on Linda Ikeji Blog.
Uncategorized