Cristiano Ronaldo has joined figures around the world in paying tribute to Her Majesty Queen Elizabeth II.  The Manchester United forward took to Instagram to share an emotional message after the news of her tragic passing was announced.  Ronaldo wrote: ‘Seven years of my career were played in the Premier League, making this my 8th season living in England.  ‘Throughout these years, I’ve felt the everlasting love of the UK for it’s Queen, and how important Her Majesty was and will forever be to the British people.  ‘I pay my respect to her memory and I mourn this irreplaceable loss with the country that I’ve learned to call home. My thoughts and prayers are with the Royal Family.’ 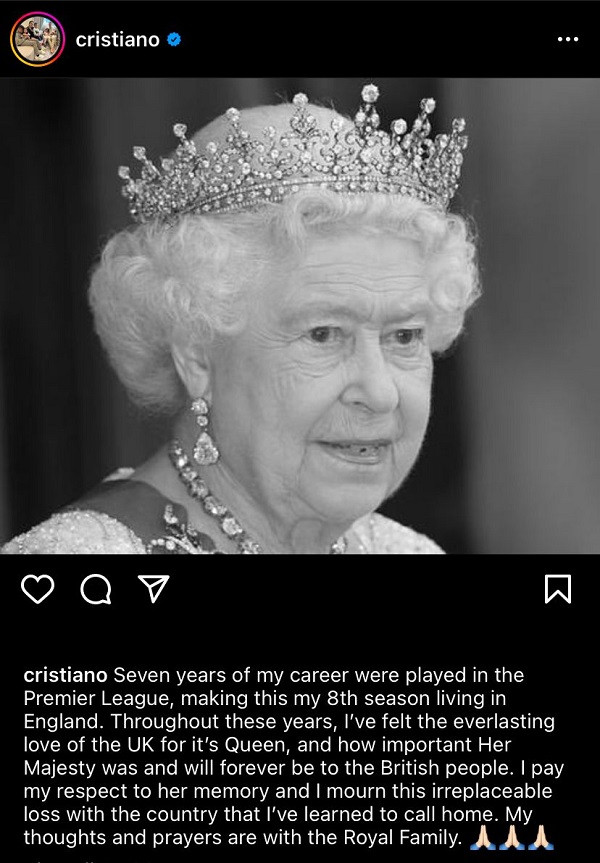 The Department for Digital, Culture, Media, and Sport (DCMS) held a meeting with all major sports at 9.30am to determine the plan of action for this weekend’s league games. However, the Premier League and EFL released a statement saying they had made the decision to postpone this weekend’s fixtures to honour Queen Elizabeth’s ‘extraordinary life and contribution to the nation’. The Premier League released the following statement: ‘At a meeting this morning [Friday], Premier League clubs paid tribute to Her Majesty Queen Elizabeth II. ‘To honour her extraordinary life and contribution to the nation, and as a mark of respect, this weekend’s Premier League match round will be postponed, including Monday evening’s game.’ Richard Masters, Premier League Chief Executive, added: ‘We and our clubs would like to pay tribute to Her Majesty’s long and unwavering service to our country. ‘As our longest-serving monarch, she has been an inspiration and leaves behind an incredible legacy following a life of dedication.’The post Cristiano Ronaldo pays his tribute to ‘irreplaceable’ Queen Elizabeth II following her death appeared first on Linda Ikeji Blog.
Uncategorized