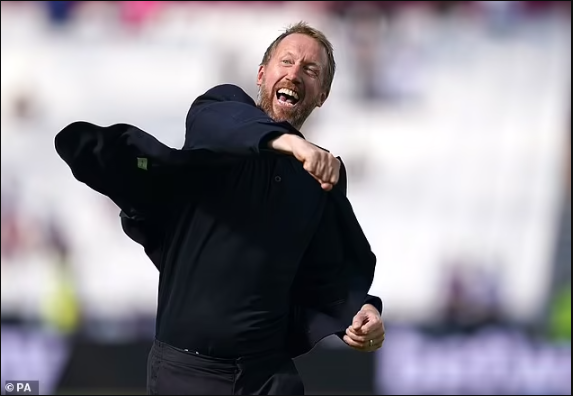 Chelsea have confirmed the appointment of Graham Potter as their new head coach. Potter has signed a five-year deal and will take charge of Saturday’s trip to Fulham after agreeing to succeed Thomas Tuchel. ‘I am incredibly proud and excited to represent Chelsea FC, this fantastic football club,’ Potter said. ‘I am very excited to partner with Chelsea’s new ownership group and look forward to meeting and working with the exciting group of players and to develop a team and culture that our amazing fans can be proud of.  ‘I would also like to place my sincere thanks to Brighton & Hove Albion for allowing me this opportunity and in particular Tony Bloom and all the players, staff and supporters for their continued support during my time at the club.’  Potter is expected to bring a number of members of his Brighton staff with him to Stamford Bridge, including coaches Bjorn Hamberg and Billy Reid plus assistant recruitment chief Kyle Macaulay. Potter, who will take Chelsea training for the first time tomorrow, received assurances that he will given the time to make things work at Chelsea in line with the contract that runs until 2027. However, Tuchel’s coaching staff will continue to take charge of the team in the interim with a match against west London rivals Fulham on Saturday. Sportsmail has revealed that Chelsea sacking Tuchel will cost the club £15m – with £13m going to the German and £2m to his coaching staff.   It is understood that the German was one of the Premier League’s top earners, on a salary in the region of £13m a year.The post Chelsea confirm Graham Potter as new manager on a five-year deal to replace the sacked Thomas Tuchel appeared first on Linda Ikeji Blog.
Uncategorized