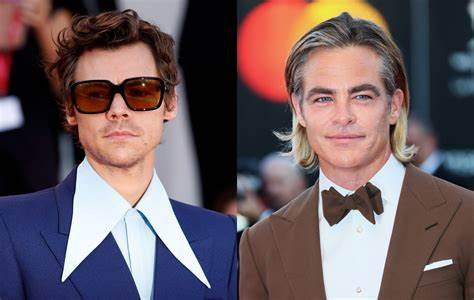 Claims of Harry Styles spitting on Chris Pine on his way to his seat at the “Don’t Worry Darling” premiere during the Venice Film Festival on Monday September 6, has been shot down by Pine’s rep.  Pine’s rep told People on Tuesday September 6, that such thing never happened. He said;  “This is a ridiculous story — a complete fabrication and the result of an odd online illusion that is clearly deceiving and allows for foolish speculation.“Just to be clear, Harry Styles did not spit on Chris Pine. There is nothing but respect between these two men, and any suggestion otherwise is a blatant attempt to create drama that simply does not exist.” Recall that the “As It Was” crooner, 28, became subject of a controversy after a clip from the screening had fans convinced that he had spat at the “Wonder Woman” actor, 42. After Styles appeared to aim his saliva at Pine, the long-haired actor froze mid-clap and stared into his lap with a smile before engaging in a somewhat shocked chuckle. As soon as the former One Direction member sat down, he looked everywhere but at Pine, giving fans more reason to believe in the alleged assault.The post Chris Pine shuts down alleged Harry Styles spit-gate appeared first on Linda Ikeji Blog.
Uncategorized