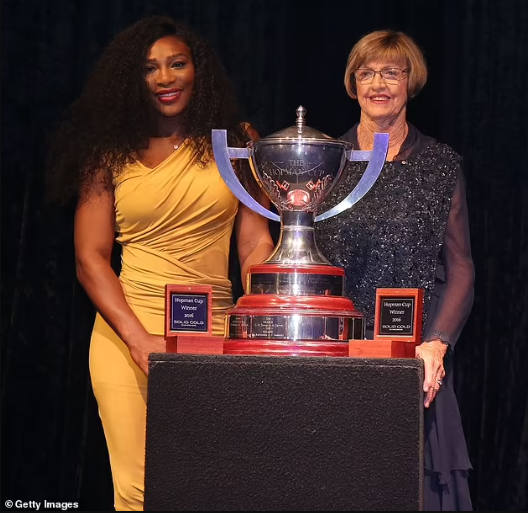 Tennis legend, Margaret Court has broken her silence over the ‘GOAT’ debate with the recently-retired Serena Williams, claiming the US star has ‘never admired her.’ The 80-year-old, who holds the record for most Grand Slam titles, is considered to be the greatest female player of all time (GOAT) after winning 24 slams and a total of 192 titles in an illustrious career.Williams retired just one slam short of Court’s record, but claimed in the lead-up to the US Open that she’d ‘already broken the record’, citing the fact that 13 of Court’s wins came in the amateur era. One of Williams’ claims for why she should be considered the greatest is that some of Court’s Slams were won before the ‘Open era’, where professionals and amateurs mixed.  ‘There are people who say I’m not the GOAT (greatest of all time) because I didn’t pass Court’s record, which she achieved before the ‘Open era’ that began in 1968,’ Williams told Vogue prior to the US Open. She also claimed that having a baby (her daughter Olympia is 5) destroyed her chances of winning more Grand Slams.’The way I see it, I should have had 30-plus grand slams. I had my chances after coming back from giving birth,’ said Williams. ‘I went from a C-section to a second pulmonary embolism to a grand slam final. I played while breastfeeding. I played through postpartum depression.’ The Aussie, who previously declined to comment on Williams’ assertion has now finally come out to address it. ‘Serena, I’ve admired her as a player, but I don’t think she has ever admired me,’ Court told the Telegraph. Court went on to say she too had children during her tennis career and would have much preferred to play in this generation.’I came back after two babies! ‘After having the first baby, I won three out of the four slams. And Serena hasn’t won a slam since,’ she said.  ‘I would love to have played in this era – I think it’s so much easier. As amateurs, we had to play every week, because we didn’t have any money. ‘Now, they can take off whenever they want, fly back whenever they want. We would be away for 10 months. That’s why I first retired in 1965, because I used to get homesick,’ said a defiant Court.In Court’s entire record at the Major events as well as singles, doubles, and mixed, she’s won 64 matches to Williams’ 39, a huge difference between the pair on the biggest of stages. The US Open organisers introduced Williams as the ‘greatest female tennis player of all time’ before each of her games, and Court said they declined to invite her to the tournament, much like the French Open organisers.The post Tennis legend, Margaret Court takes a swipe at Serena Williams as she retires just one grand slam title short of the Australian’s world record appeared first on Linda Ikeji Blog.
Uncategorized