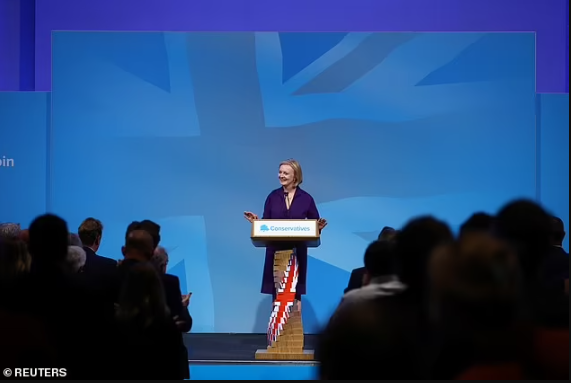 Liz Truss will become the next prime minister after her victory over Rishi Sunak in the Conservative Party leadership contest. The foreign secretary will succeed Boris Johnson on Tuesday, September 6, and become the nation’s third female. She secured just over 81,000 to Mr. Sunak’s just over 60,000 on Monday, September 5, to emerge victorious.  Mr. Johnson and Liz Truss will go to Balmoral rather than Buckingham Palace to meet Queen Elizabeth, who will ask the new leader to form a government. In her victory speech, she said: ‘Well, thank you, Sir Graham (Brady). It’s an honour to be elected as leader of the Conservative and Unionist Party. ‘I’d like to thank the 1922 Committee, the party chairman, and the Conservative Party for organising one of the longest job interviews in history. ‘Thank you very much. I’d also like to thank my family, my friends, my political colleagues, and all of those who helped on this campaign. I’m incredibly grateful for all of your support. ‘I’d like to pay tribute to my fellow candidates, particularly Rishi Sunak. It’s been a hard-fought campaign. I think we have shown the depth and breadth of talent in our Conservative Party. ‘And I also want to thank our outgoing leader, my friend, Boris Johnson. Boris, you got Brexit done. You crushed Jeremy Corbyn. You rolled out the vaccine, and you stood up to Vladimir Putin. You are admired from Kyiv to Carlisle. ‘Friends and colleagues, thank you for putting your faith in me to lead our great Conservative Party, the greatest political party on earth. ‘I know that our beliefs resonate with the British people – our beliefs in freedom, in the ability to control your own life, in low taxes, in personal responsibility, and I know that’s why people voted for us in such numbers in 2019. And as your party leader, I intend to deliver what we promised those voters right across our great country. ‘During this leadership campaign, I campaigned as a conservative and I will govern as a conservative. ‘My friends, we need to show that we will deliver over the next two years. I will deliver a bold plan to cut taxes and grow our economy. I will deliver on the energy crisis, dealing with people’s energy bills, but also dealing with the long-term issues we have on energy supply. ‘And I will deliver on the National Health Service, we will deliver for all for our country, and I will make sure that we use all the fantastic talents of the Conservative Party, our brilliant Members of Parliament, and peers, our fantastic councillors, our MSs, our MSPs, all of our councillors and activists and members right across our country, because, my friends, I know that we will deliver, we will deliver and we will deliver. ‘And we will deliver a great victory for the Conservative Party in 2024, thank you.’The post Liz Truss’ Tory leadership victory speech in full after defeating Rishi Sunak in race to succeed Boris Johnson as new UK prime minister appeared first on Linda Ikeji Blog.
Uncategorized